5 Most Popular Indian CEOs in The World 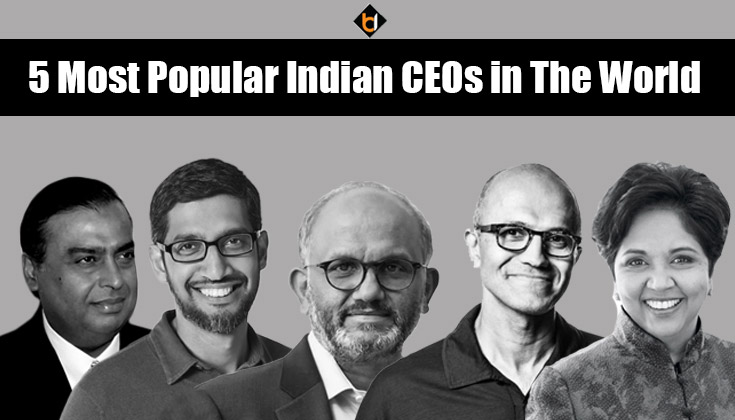 You might have read a lot of motivational books from international business leaders revealing their business management and leadership secrets, how they made it through the path and achieved global success. One thing you will find common in all of the successful business personalities will be the passion and determination to keep up with their goals, no matter how much time it demands to get there.

Talking about global leaders and CEOs, Indians have been representing the country, and are changing the global business landscape for the last three decades.

Indian CEOs have uplifted the reputation of their companies in the most powerful manner. Not only do they motivate you with the extraordinary path of success but make you feel proud of what they have achieved on the global stage.

Let’s talk about the most famous Indian CEOs in the world, you can get inspiration from.

One of the youngest CEOs in the world, Sundar Pichai is known for his exceptional management skills and achievements. Born in Madurai, Tamil Nadu, his full name is Pichai Sundararajan. Before getting appointed as the CEO of Google LLC, in 2015, he worked as the product management head-on Google Toolbar and was involved in Google Chrome development.

Being among the most famous CEOs in the world, Sundar Pichai’s net worth is near $600 million. He finished his Metallurgical Engineering degree from IIT Kharagpur and completed his advanced degree in Material Science from Stanford University. Apart from being an amazing student, Sundar Pichai loves to play chess and was also the captain of the school cricket team. Joined Google in the year 2004, he is known for taking Goole to new heights with his skills and visions.

As per Forbes’ ‘The Real-Time Billionaires List’ Mukesh Dhirubhai Ambani is the 9th richest man in the world with a net worth of $60.8 billion. He is the face of emerging telecommunication in India and named in various famous CEO surveys of the international business world.

Mukesh Ambani is the CEO of Reliance Industries Limited, and his legacy is an inspiration for young entrepreneurs. He earned his Chemical Engineering degree from Mumbai University and finished MBA from Stanford University. He joined RIL in 1981, set up by his father Dhirubhai Ambani and since then, the company has witnessed success in diverse industries from infrastructure, communication, petroleum refining, oil production and more. Mukesh Ambani has been the face of Indian businesses for the last four decades, making decisions that are progressive and powerful.

President and CEO of Adobe, Shantanu Narayen is one of the prestigious leaders, known for intelligence and leadership across the world.

Joined Adobe in the year 1998, he became the Chief Operating Officer and then CEO of Adobe in 2007.

Narayen grew up in Hyderabad and earned his Bachelor’s degree in Electronics & Communication Engineering from Osmania University. After completing his Master’s in Computer Science from Bowling Green State University Ohio, he started his career with Apple and with his hard work and immense talent, he became CEO of Adobe at the age of 45.

Another buzz maker these days, Satya Nadella, is known as the best CEOs of the famous tech giant Microsoft. Having worked with Microsoft since 1992 and handled cloud and enterprise groups with superior leadership abilities, Satya became the CEO of the company in 2014.

Born in Hyderabad, Nadella earned his Bachelor’s degree in Electrical Engineering from Manipal Institute of Technology in Karnataka and travelled to the US for receiving Master’s degree in Computer Science from University of Wisconsin–Milwaukee.

After becoming the CEO, he changed the direction of the company and took it on another level with a global transformation in the working culture and growth. Apart from being one of the major influencers in the tech industry, Nadella is also popular for his motivational statements and buzz making headlines.

Women too are revolutionizing global companies and taking the Indian leadership to the global level with their hard work, leadership skills and smart financial decisions in the past few decades. Indra Nooyi, who has been listed as the 13th most powerful woman in the world by Forbes, became the CEO of the second-largest food and beverage company PepsiCo, in 2006. She joined the firm in 1994 and replaced Steven Reinemund as a 5th CEO for incorporating the growth of the company globally.

Nominated in several popular surveys for powerful businesswomen in the world, her total remuneration had increased to $19,087,832, along with the $5.5 million of equity.

Nooyi was born in Madras, Tamil Nadu, and earned her bachelor’s degree in PCM from the University of Madras. She also received her PG diploma from IIM Kolkata and moved to the US for Masters in Public and Private Management. Starting her career with Johnson & Johnson, Indra Nooyi has made a huge impact on PepsiCo profit increase since 2001 and motivated young Indian women, working hard to achieve their business goals.

Not only these, people like Rajeev Suri, Arvind Krishna, Ajaypal Singh, Kiran Mazumdar Shaw and so on, but there are also hundreds of Indian business leaders, representing the nation on the global business front.

Watching so many Indian leaders taking the country on a global stage brings motivation and admiration for aspiring entrepreneurs.

10 Online Courses Every Entrepreneur Should Take

When we are jumping into the business world, most of us think that our life taught us enough that we have practical knowledge about...
Read more

New Delhi. APL Apollo Tubes Limited, the largest manufacturer of ERW steel pipe and section in India, will be the main sponsor of the...
Read more

Since India's economic growth rate has come down to just five percent, there is a stir in the deepening crisis in the...
Read more

The effect of coronavirus (Covid-19) has started appearing on corporate India and startups. Layoffs have started in companies. After the stalled work due to...
Read more
Load more