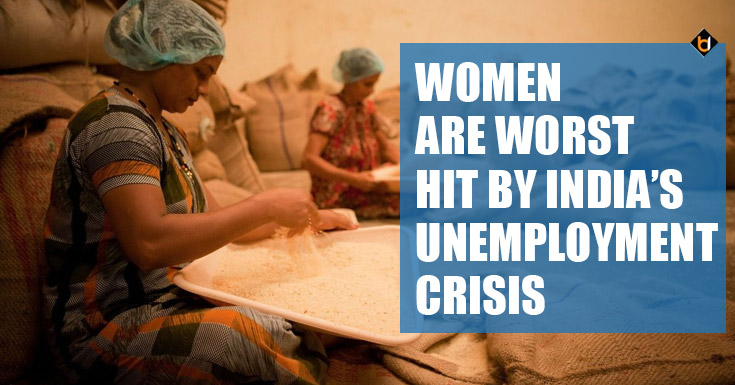 The Periodic Labor Force Survey (PLFS) conducted by the National Sample Survey Office (NSSO) said that in the 2018 financial year, the unemployment rate in India stood at 6.1%. Among these figures, the unemployment rate in women is 18%. The data is worrying, as it is ranked one of the lowest in the world, and is dropping down since 2004-05. One primary concern about this is that we don’t have a regular study published in this matter by the government. Surveys are conducted every five years and are published even late, thus keeping the factors related to women unemployment unearthed.

But the burning question is – why are women worst hit by the unemployment crisis?

Josephine Butler, in her book Education and Employment of Women nicely put the crisis as a ‘conspiracy of silence’. She clearly provided the facts and stated that education has been one of the foremost reasons why women are hit with industrial disabilities. Societies across the world have portrayed marriage, and not education, as a means of sustenance and subsistence. This ideology has increased a measure of helplessness among women and has pushed societies to cut-short the education that they provide to their womenfolk.

A study conducted by two Harvard students, Layla O’Kane and Rachel Levenson revealed that while 4% of educated urban men are unemployed, among urban educated women it is 8.7%. While lack of education is the primary reason behind this disparity, studies have found that even highly-educated women face barriers in getting employed. Lack of education means that women get employed in desperation, that too in unskilled jobs in the informal or unorganized sector, where they are more vulnerable to discrimination and violence. According to the OECD Survey done in 2017, India ranks even below Mexico, Indonesia, and Brazil in this matter.

Despite rapid economic growth, women in India have been dropping out of the economic workforce due to a large number of reasons. We have been living in a culture where the society stigmatizes women who work, or in a way, cannot bear to have a woman compete with a man as the breadwinner of the family. Many women drop out of their job due to family responsibilities, and when they re-join, they find it difficult to find their career path in the competitive world. In short, opportunities for worthwhile employment are bleak for women who are searching for their path to carve a niche for themselves.

Women entrepreneurship in India is bleak too, with only 21.49% of total establishments owned by women in India. Some of the factors that have led to this are the lack of access to credit facilities and the absence of business management skills due to lack of education.

According to the annual economic survey conducted in 2017-18, an article named Gender and Son Meta-Preference: Is Development Itself an Antidote? was published which gave some interesting details regarding women unemployment. It stated that women’s employment has declined over time, and many women do not get the same access to employment as men do. The report also concluded that while men get greater employment opportunities, women suffer a lack of it due to increasing family responsibilities.

Families are becoming nuclear leaving all responsibilities to women at home. Sadly, many employers are making it difficult for women to maintain job stability. Maternity leaves are frowned upon, and preferences are given to male workers who are ready to extend their work timings, work in graveyard shifts, and give commitments that are not possible or practical for women employees.

What Does The Future Hold?

While there are many pitfalls that are keeping women unemployment at the downside, still, the economic uptrend has created more educational opportunities for women that have the potential for increasing employment opportunities. At the same time, many organizations have started to provide childcare facilities which allow women to balance their family and work life. With more women representation in the political scenario, we can be optimistic that women’s issues will be taken care of at the highest levels of the economy.

10 Online Courses Every Entrepreneur Should Take

When we are jumping into the business world, most of us think that our life taught us enough that we have practical knowledge about...
Read more
OPINION

Are you somebody who got an idea that you think can turn into the next profitable million or a billion-dollar business? Not trying to...
Read more
OPINION

1. Be optimistic There should always be optimistic thinking for the future. If you think positively then you create goals and opportunities for yourself. When...
Read more

Currently, India’s whopping $2.6 trillion economy stands at 6th position in the world. It is already at the halfway point of the target set...
Read more

Startup Ideas After The Lockdown

Getting rid of lockdown is not easy. Even more difficult is what the government will do to cover the damage done when the government...
Read more

Delhi-NCR On Top For Startups

Delhi-NCR has overtaken Bengaluru and Mumbai in terms of setting up startups. Research firms TIE Delhi-NCR and Zinnov have submitted a report by cities...
Read more

How to start the business of making paper plates - Whenever you go to eat food at a wedding, you eat there on a...
Read more
Load more