This farmer has helped hundreds of farmers with his innovation, has received national awards and patent 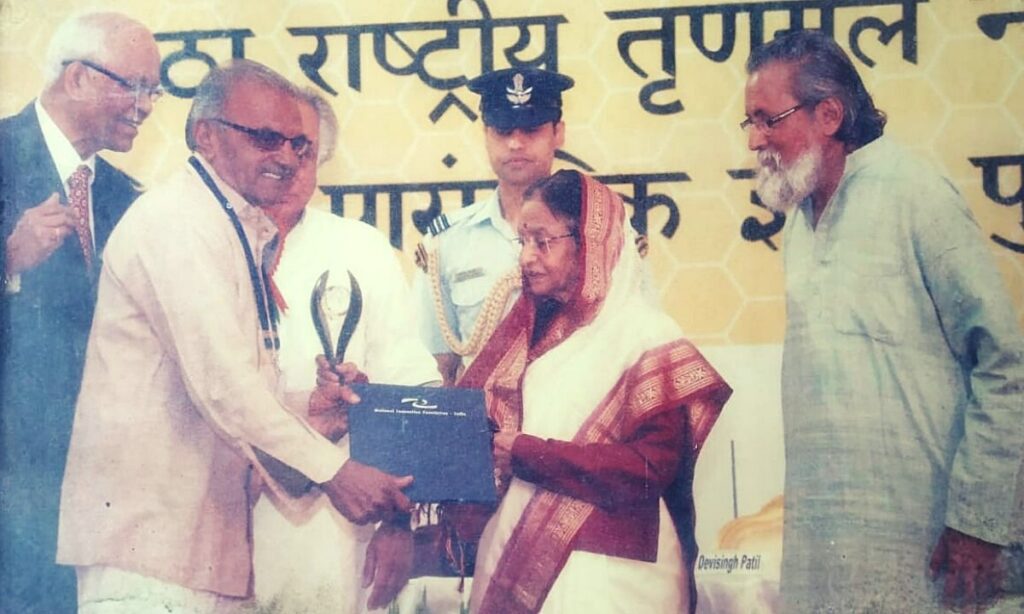 It is said that necessity is the mother of invention. But if you think that inventions can only be done by big companies or professional engineers, then this is an incomplete truth. Because there are many people in our country who have not completed their schooling and today their identity in society is as an inventor. This is possible only due to the skill of these people and the thinking of solving the problems of society itself. Today we are going to introduce you to one such inventor from Gujarat, who has solved many problems of farmers by doing many inventions at the grassroots level (Grassroots Innovations).

Amrit Bhai Agravat (75), a resident of Pichhor village in Junagadh, Gujarat, left his studies after the fifth grade. He was seven when his father died. To run a household, his mother worked as a labourer in the fields of others. Seeing his mother working hard day and night, Amrit Bhai quit his studies and started working in the fields himself. He says that it was from these experiences that he learned the skills to solve problems. While working in the fields, he closely observed and knew the problems of the farmers.

Talking to The Better India, he said, “While working in the fields, I also came to know about the tools and equipment used for farming. I also learned mechanic work and started a small workshop of my own. In this workshop, I made many inventions, big and small. Earlier, most of the farming work was done with the help of bulls. So I made tools that farmers can use in the fields with the help of oxen. However, at that time I did not even know that what I am doing is an invention. ”

Amrit Bhai has made many inventions such as ‘Tilting Bulk Cart’, ‘Ground Nut Digger’, ‘Janak Santi’, ‘Self Locking Pulley’, and ‘Veet Showing Box’.

Made several kinds of inventions:

Amrit Bhai says that in the workshop, he used to repair equipment related to farming. Simultaneously, they tried to understand the need of the farmers. He observed that for the farmers to work in the fields, different instruments are required. These instruments have to be made separately and there was a lot of problem in transporting them. Therefore, in 1972 he created a device called ‘Janak Santi’. The speciality of this tool made of iron was that it could be used in any kind of crop and soil. Also, you can work by applying about 10 types of agricultural implements in this one device.

He adds, “The Janak Santi helped the farmers tremendously. After this, many farmers used to come to me and tell me about their problems. At that time, due to less rainfall in Saurashtra, the soil became very hard. Due to this, farmers growing peanuts were having difficulty in harvesting it. One or two farmers came and told me that for harvesting peanuts, I should make a machine. So I created a ‘groundnut digger’ machine, which farmers can easily harvest peanuts by running with the help of oxen. ”

In this machine made of iron, he applied two wheels and a blade. Farmers can apply blades of different lengths to it, depending on their need. One or two people, he says, can easily harvest peanuts from it. This will save both the hard work and time of the farmers. When his farmers came to know about this machine, they started getting orders constantly. He has made more than 250 ‘Ground Nut Diggers’ to farmers.

Subsequently, he also made a machine for sowing wheat. With the help of which wheat seeds can be sown in the fields at the same distance and depth. He says that the way farmers sowed wheat seeds earlier, wheat did not grow at the same distance. Due to this, if there were too many wheat earrings in some parts of the field, some part was left empty. This had an impact on the farm produce. But, the invention of Amrit Bhai solved this problem as well.

He says, “All these inventions did not happen in two to four days.” It took months to build a machine, it took many years. But I kept doing my work. After many failures, success was found. But until success was achieved, I kept trying. Many times there were financial problems also, but if I do not do anything new, I would never reach here. ”

He further states that one of his major inventions was the ’tilting bullock cart’. This is such a bullock cart, in which the farmers can sit and lift it down from one side and take the goods down, just like in a hydraulic trolley. Farmers use bullock carts to deliver manure etc. to the fields. But to get the goods off the bullock cart, other people need help. He discussed this with the farmers and understood their need. Subsequently, after about seven-eight years of tireless efforts, he built a bullock cart with a ‘hydraulic system’, which he named ‘Aaruni’.

The bullock cart is fitted with a ‘hydraulic jack’ and is accompanied by a winding machine and an oil tank. It is built using a metal frame and has four wheels and eight vertical gears. In 1995, his design was successfully completed. After the success of ‘Aruni’, in 1997, he created a ‘self-locking pulley’ to draw water from the well. He explains, “Once, I saw an elderly woman in the village draining water from a well.” The woman began to gasp while she was draining water because, even if she accidentally missed a rope while drawing water, she had to work hard again. ”

After this incident, they felt that a device should be made so that even if the rope is left while draining the water, the bucket should not fall back into the well but stop there. Therefore, he created this ‘pulley stopper’ or ‘self-locking pulley’, which reduced the effort of drawing water from the well. His made pulis were planted in many villages of Gujarat and he received positive response from all over the place. Amrit Bhai also received the ‘Sardar Krishi Puraskar’ from the Government of Gujarat for his invention.

These inventions of Amrit Bhai are credited for taking the country and the world to Professor Anil Gupta, the founder of ‘Honey Bee Network’. In the 90s, Professor Gupta started a campaign to find these grassroots inventors. During his visit, he came to know about Amrit Bhai and reached his village to meet him. Since then, Amrit Bhai has been associated with the ‘Honey Bee Network’ and due to his own efforts, he has also got a patent for his ‘Aruni bullock cart’. And he has also travelled to Africa and Paris.

Vipin Kumar, director of the National Innovation Foundation, says, “Amrit Bhai has made many inventions and has been awarded the ‘National Grassroots Innovation Award’ and ‘Lifetime Achievement Award’ by NIF for his inventions. His inventions have helped hundreds of farmers. ” Apart from inventing himself, Amrit Bhai has also played an important role in finding and polishing other grassroots inventors. He has participated in about 44 research trips organized by Srishti Sansthan to search for these inventors.

During these trips, he visited almost all the states of the country and found inventors like him working at the ground level. Along with finding these inventors, they also provide them with technical help at their workshops. However, due to old age, his workshop is now being handled by his son Bharat Bhai Agravat. Bharat Bhai, like his father, is an inventor. He says, “On the lines of the innovations made by Dad, we keep making more and more new instruments according to the need of the farmers. Hundreds of farmers from districts like Junagadh and Gir Somnath are associated with us. Now with the help of social media, farmers of other states also know us and visit us. With the help of ‘knowledge’ and ‘creation’, our instruments have also reached the country of Rome. ”

Read: A turnover of 90 lakhs from a Pokémon of Rs 300, became a successful entrepreneur with a great idea

Previous ArticleBharat Bandh: Farmers will jam the roads from 6 am tomorrow, markets will also remain closed, these services are exempted
Next Article In this society of Mumbai, people made flowers in some easy ways, the organic colors of Holi