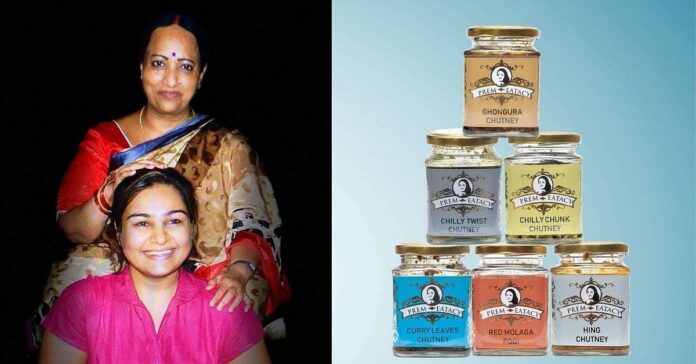 There could not have been a better tribute to the late love Lata Devi, as her daughter-in-law, Sonam Surana and son, TS Ajay have given them. Sonam and Ajay have started a company, Prem Eatacy, named after their mother. Customers can get delicious homemade food from here. Launched in November 2020, the company (home business) has served more than 1500 customers so far. Sonam and Ajay started this company inspired by the memory of the delicious dishes made by their mother.

Businesslend Talking to Ajay, “I cannot separate my mother from delicious food.” Ajay’s mother, Premlata used to cook very tasty food. The food was so delicious that every member of the family kept licking fingers.

Whether it was everyday food or chutney, spice powder or pickle, Premlata had magic in her hands. Everything she made was very delicious.

Jasmin Bhasin on the Cover Page of The Lifestyle Journalist Magazine

Ajay remembers the day his mother said goodbye to the world. He says, “It was July 2017, that day was my birthday.” He made Molagapodi (gun powder) specifically for me. After breakfast we all sat with him. Suddenly he got restless and within few seconds he died on my lap. ”

A year after Prem Lata’s demise, Sonam was cleaning the mother-in-law’s room in August 2018, when she found a diary of her mother-in-law, in which she had written recipes for several recipes.

Sonam was not particularly interested in cooking. She explains, “During the lockdown, since we were all at home, I decided to try and make some hands-on recipes. He wrote all kinds of recipes in the diary, from his favorite gongura chutney to the famous Malgopodi. ”

She then packed food with her husband, Ajay, in separate containers and went to distribute it to close relatives.

Sonam says that she never thought that her relatives would call her and give her feedback about their dishes. She explains, “Almost every relative called us and told that they enjoyed the taste of the food. His response was encouraging. ” Then they thought of doing it on a large scale. Sonam says that she was her father-in-law, who encouraged her to start her own home business. He said it would be a true tribute to his mother-in-law. Sonam and Ajay start their business with a good plan.

Sonam says, “My father-in-law’s encouragement pushed me towards becoming an entrepreneur. Earlier, I was neither much interested nor patient in cooking, but I have changed over time and I am happy that I took advantage of it. ”

Note that if you are traveling by airplane, you will have to pay 1000 rupees immediately for a small mistake.

Sonam started off with stalls at various exhibitions in the city, where she received a fairly good response. This encouraged Sonam to do more. It also helped them find out what the market wants and which products have the highest sales.

Sonam says, “I had great faith in the recipe and the detailed notes of my mother-in-law. I get all my inspiration and strength from them. ” Even today, when someone appreciates his product, Sonam gives all the credit to her mother-in-law. She thanks him for leaving this legacy behind, thanks to which she is able to do all these things today.

Sonam says, “I think he is with me at every step.” She had a dream to do something related to food during her lifetime, but she could not. ”

When asked about the initial investment in ‘Prem Itasi’ (home business), Ajay says, “Since we work from the kitchen of our home, we did not have to invest to take up space on rent. So the company was started with an initial investment of around Rs 10 lakh. ” The most important thing for the company (home business) is that it has caught a good pace in a very short time and has been able to get orders from online retail platforms. Ajay also said that customers from Singapore and the US have contacted him and demanded the product.

The company was launched with the goal of completing 100 orders a month. Ajay says that he was able to make close to Rs 5 lakh in his first month of sales, that is, more than 2000 orders were received every month. Sonam and Ajay say that they are overwhelmed by the love and admiration of the customers.

Nutan Srimal is a fan and customer of Prem Itsi. Nutan lives in Mumbai and has sourced many products. She says, “We have tasted almost every product of this brand, I am convinced of their quality.” My disappointment is with just one thing, that is the time it takes to get the goods after placing the order. ”

She says, “Mint-coriander chutney, curry leaf powder and molagapodi are very much liked by my family as well as friends. Of course, it is a store-bought product, but its taste is similar to a home-made meal. This is the biggest USP for me. ”

To date, the brand (home business) has 21 varieties of pickle, podi (powder) and chutney on its list. Priced between Rs 175 to Rs 225, some bestsellers include Hing chutney, Molagapodi and Pudina coriander chutney.

All these products are available on online retail platforms, you can visit their website to buy their products.

Facebook
Twitter
Pinterest
WhatsApp
Previous articleBank Union finds new way to stop privatisation, asking customers to reach their opinion
Next articleHad to learn swimming in the flood, today the country was made proud by making a record

Nitil Bhardwaj, 28, who lives in Mudera village of Ramnagar block in West Champaran, Bihar, is rearing pearls and fisheries. In addition, he has...
Read more
SUCCESS STORIES

Many people lost their employment due to the Corona epidemic. But there are some people who took the risk of leaving their jobs and...
Read more
SUCCESS STORIES

Income tax rules: These rules related to income tax have changed from today, if you do not pay attention, then there will be a...

Good news for home buyers! Cheap flats are available in Delhi-NCR, this is the last date of application

10 thousand cheap houses will be built in NCR by the Greater Noida Authority. These...
Read more

Now the Criminals are raising money from people's accounts through Fixed Deposits. In this regard,...
Read more

Best Tips For Own Successful Business

"Will my business succeed… ??" These are the questions that people think of who start any business of their own… .and this is also true....
Read more
Load more