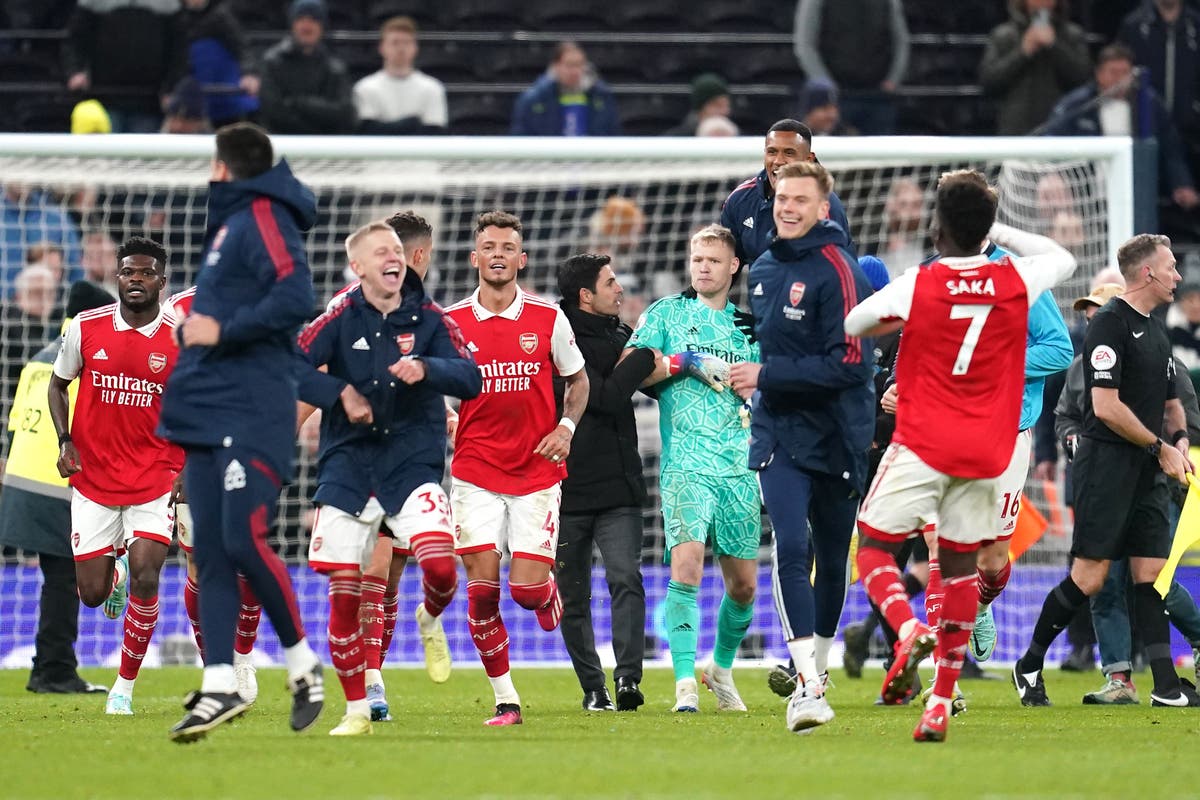 The Football Association has “strongly condemned” the incident which noticed Arsenal goalkeeper Aaron Ramsdale attacked by a fan after his facet’s victory over Tottenham within the north London derby.

A spectator jumped onto the promoting hoardings behind the purpose after Arsenal’s 2-0 win and tried to kick Ramsdale within the again.

A press release from the FA learn: “We strongly condemn the incident involving a spectator that followed today’s Premier League fixture between Tottenham Hotspur and Arsenal.

“This is wholly unacceptable behaviour and we will work together with the police, the relevant authorities and the clubs to ensure the appropriate action is taken.”

Tottenham stated they’d already reviewed CCTV footage to determine the supporter and would take the “strongest possible action”, together with an “immediate” stadium ban.

“We are appalled by the behaviour of a supporter that attempted to attack Arsenal goalkeeper Aaron Ramsdale at the end of today’s match,” a membership assertion learn.

“Violence in any form has no place in football.”

Speaking after the sport, Ramsdale advised Sky Sports: “The Spurs fans were giving me some throughout the second half, I gave them some back, which to the few people I did do it to, was probably well-greeted, sportsmanship-like.

“Then a fan tried to jump over and give me a little punch on the back. That’s what happened and it’s a shame because it’s just a game of football at the end of the day.

“I think both sets of players tried to bring me away. Thankfully nothing actually happened too drastic. It’s a sour taste, but I’m sure we’ll enjoy it when we go back in the dressing room.”

Arsenal supervisor Mikel Arteta, who claimed he had not seen the incident, was requested if he was involved that gamers could possibly be attacked so simply.

Tottenham boss Antonio Conte stated: “If it happened, this type of situation, it’s not good.

“To be able to show always respect is better, in any moment, for the opponent, for the players. If it happened, I didn’t like it.”

Tottenham defender Eric Dier, who served a four-match suspension in 2020 for marching into the group to confront an abusive spectator after an FA Cup loss to Norwich, described the Ramsdale incident as “unacceptable”.

He advised Sky Sports: “I didn’t see it, but obviously it’s just unacceptable really. There’s nothing more I can say other than it’s unacceptable and it shouldn’t have happened.”

A Premier League assertion learn: “The Premier League condemns the behaviour of a fan at the conclusion of the Tottenham Hotspur FC and Arsenal FC match this evening.

“There is no place in football for acts of violence, and under no circumstance should players be attacked or fear for their safety at games.

“The League will support the clubs and relevant authorities in taking the strongest possible action against the individual responsible.”

A press release on the Professional Footballers’ Association’s Twitter account after the incident learn: “Violence towards players is completely unacceptable. These types of incidents are happening far too often.

“Players have a right to be safe in their place of work. When a player is attacked we expect the laws and regulations that are in place to protect them to be properly enforced.

“As the players’ union we treat this as a priority issue. We will be continuing to work with the authorities to demand that players and staff are better protected in their place of work.”

“This is part of football, you’re always going to get a little bit of stick. But for a fan to come and do that, come and try to kick a player that’s played on the pitch, it’s completely unacceptable.

“I’m sure Spurs will act accordingly. He should not be allowed in a football stadium, that guy. It’s completely out of order.”

Apple cracks down on websites with iOS 16 developer beta profiles