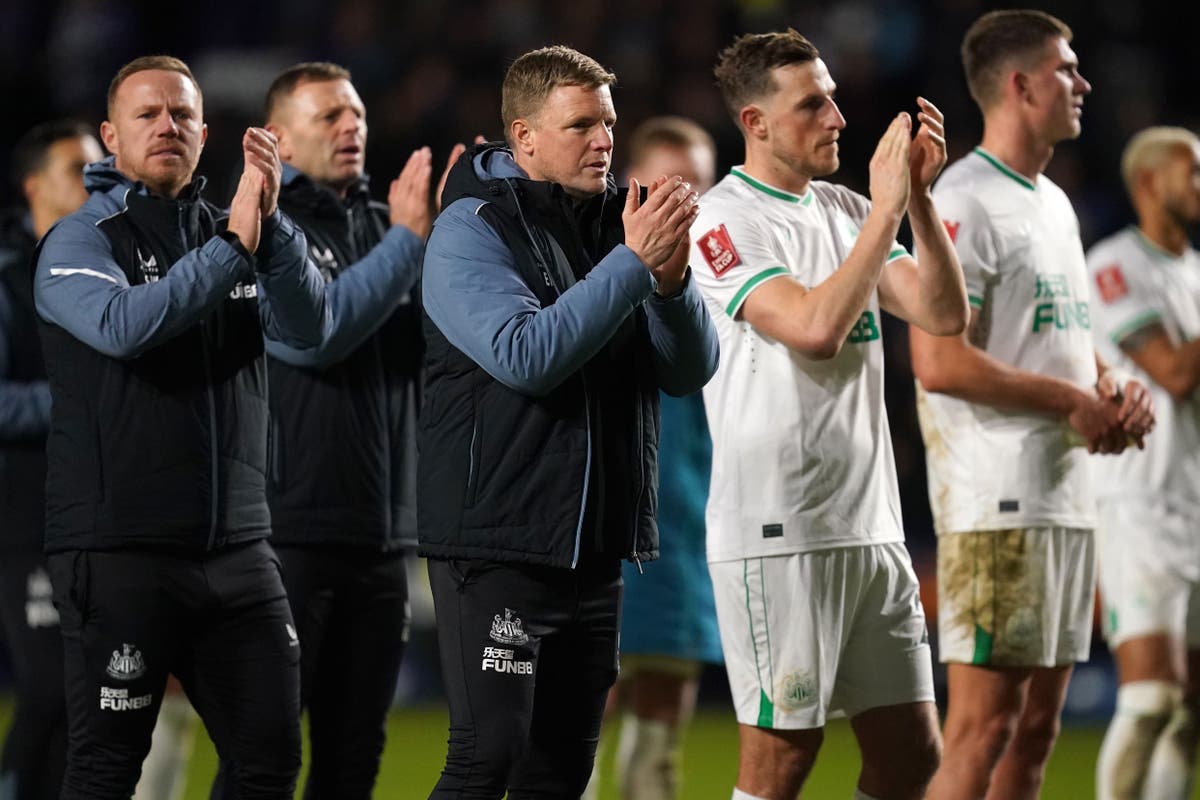 Newcastle boss Eddie Howe admits he doesn’t have the power in depth required after crashing out of the FA Cup at Sheffield Wednesday.

Howe made eight modifications to the aspect that drew with Premier League leaders Arsenal on Tuesday and noticed them dumped out of the competitors by a League One aspect for the second season operating in one of many shocks of the third spherical.

Josh Windass’ second-half double set Wednesday up for certainly one of their greatest outcomes lately, with the Magpies unable to drive a replay after Bruno Guimaraes obtained them again in it.

Howe had turned to Guimaraes, Miguel Almiron, Joe Willock and Kieran Trippier to attempt to rescue the tie however they got here up quick.

“We are aware that we don’t have the deepest squad of any team in the Premier League, we are low on numbers but we feel high on quality,” Howe mentioned.

“Injuries will dictate how stretched you feel. We gave an opportunity to a lot of players that haven’t played a lot of minutes this season, I thought there were positives and negatives within their performances.

“You pick your team looking ahead to future games. We have a very quick turnaround, late kick-off today and then Leicester on Tuesday (in the Carabao Cup). I felt I saw some fatigue in the lads at Arsenal, it was a great performance, I thought it would be unwise of me to pick the same team for this game and Leicester as well.”

Things might need been completely different had Newcastle not come up in opposition to Sheffield Wednesday goalkeeper Cameron Dawson within the type of his life as he twice denied Alexander Isak within the first half after which made sensible stops from Elliot Anderson and Jacob Murphy to maintain Newcastle at bay.

In the ultimate 10 minutes, Dawson was not even pressured to make a save as Chris Wood skied a sitter to make it 2-2 and Howe knew the missed possibilities had been expensive.

“It was a disappointing result for us, I thought we gave it our all until the end, we created chances to score and we didn’t take them,” Howe added.

“Their goalkeeper played very well, it was always going to be a difficult game coming here, we needed to get our noses in front and we didn’t and that made it very difficult.

“We were desperate to win the game and I picked a team that I thought was strong enough to do that at the start of the match and the moments and chances were there for us in the first half to take the lead, we just weren’t clinical in front of goal and that remained all the way through the second half as well.”

For Wednesday this end result continues their feelgood issue as they give the impression of being to complement their League One promotion push with a cup run.

And boss Darren Moore says it demonstrates the magic of the FA Cup.

“Yeah, it shows the FA Cup is still alive,” he mentioned. “We spoke before the game about what it brings, two clubs together in the pyramid, it was an excellent cup tie and I am really pleased the game lived up to what it was on paper.

“Sheffield Wednesday against Newcastle, both teams on a good run in their respective leagues.

“What pleased me most was that we had a gameplan that we had been working on in the week, it was to engage them high up the pitch, not sit back and allow them to pick us off. It was a brave decision by us and it worked.

“Josh Windass will get the headlines, it was two exceptional goals. But I thought overall it was a solid performance.”