‘We can and must be better than this’: what resigning MPs informed Boris Johnson 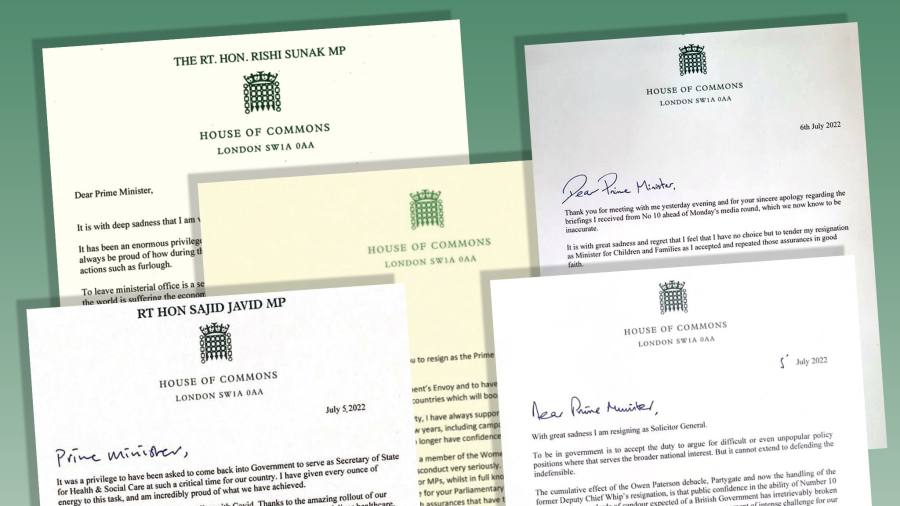 Sajid Javid Health secretary
“It has been an enormous privilege to serve in this role, but I regret that I can no longer continue in good conscience.”

Will Quince Education minister
“With great sadness and regret, I have this morning tendered my resignation to the Prime Minister after I accepted and repeated assurances on Monday to the media which have now been found to be inaccurate.”

Alex Chalk Solicitor common
“To be in government is to accept the duty to argue for difficult or even unpopular policy positions where that serves the broader national interest. But it cannot extend to defending the indefensible.”

Robin Walker Education minister
“I have always believed it is the job of our party to strike the right balance between efficiency and compassion, but the image being projected from the struggles of the last few months is that we risk achieving neither.”

John Glen Treasury minister
“I can no longer reconcile my commitment to the role and to the financial services sector with the complete lack of confidence I have in your continuing leadership of our country.”

Victoria Atkins Justice minister
“I can no longer pirouette around our fractured values. We can and must be better than this.”

Jo Churchill Environment minister
“Recent events have shown integrity, competence, and judgement are all essential to the role of Prime Minister, while a jocular self-serving approach is bound to have its limitations.”

Stuart Andrew Housing minister
“There comes a time when you have to look at your own personal integrity and that time is now.”

Mims Davies Employment minister
“I have no confidence in your leadership, and I ask you to consider your position for the sake of the country and party.”

Rachel Maclean Minister for safeguarding
“Values, principles, integrity and decency matter more than anything and I cannot continue to stand by and do nothing.”

Mike Freer Minister for exports and minister for equalities
“I feel that we are moving away from the One Nation Conservative party I joined, not least in creating an atmosphere of hostility for LGBT+ people and I regret I can no longer defend policies I fundamentally disagree with.”

Jonathan Gullis Northern Ireland Office
“I feel for too long we have been more focused on dealing with our reputational damage rather than delivering for the people of this country and spreading opportunity for all, which is why I came into politics.”

Saqib Bhatti Department of Health and Social Care
“My conscience will not allow me to continue to support this administration. It is for this reason that I must tender my resignation.”

Nicola Richards Department for Transport
“At a time where my constituents are worried about the cost of living and I am doing my best to support them, I cannot bring myself to serve as a PPS under the current circumstances, where the focus is skewed by poor judgement that I don’t wish to be associated with.”

Virginia Crosbie Welsh Office
“I am forced to say that the sheer number of allegations of impropriety and illegality — many of them centred around Downing Street and your Premiership — is simply making your position untenable.”

Felicity Buchan Department of Business, Energy and Industrial Strategy
“I am afraid you have lost the confidence of my constituents and me. The current situation is untenable.”

Laura Trott PPS to the secretary of state for transport
“Trust in politics is — and must always be — of the utmost importance, but sadly in recent months this has been lost.”

Claire Coutinho PPS to the Treasury
“I have resigned my position as a Parliamentary Private Secretary to HM Treasury.”

Selaine Saxby PPS to the chief secretary to the Treasury
“Trust, truth and integrity are vital in our work as politicians and public servants, and I had hoped that the reset earlier in the year might have given us the chance for a different direction, however, the events of this week have shown that not to be the case.”

Duncan Baker PPS within the Department of Levelling Up, Housing and Communities
“I must remain true to my values and principles. I have felt for a considerable while that the situation cannot go on.”

Craig Williams PPS to the chancellor of the exchequer
“I believed it was right that we draw a line under previous events and focus on rebuilding trust with the public and focusing on delivering good policies. It has now become apparent over recent days, that this is becoming impossible.”

Mark Logan PPS to the minister of state
“There is only so much anyone can expect my constituents to accept or ignore.”

Sara Britcliffe PPS to the Department for Education
“I believe the government risks becoming so subsumed in continuous firefighting of self-inflicted issues, that it will detract from our ability to deliver on this critically important agenda.”

Mark Fletcher PPS to the secretary of state for BEIS
“You suggested that the events of that night [when former deputy chief whip Chris Pincher was accused of drunkenly assaulting two men] were the fault of the colleagues who were present for allowing him to drink so much. Such a view seems to me an attempt to absolve Mr Pincher of his actions and, in so doing, to be an apologist for someone who has committed sexual assault.”

Ruth Edwards PPS to the Scotland Office
“I was heartbroken to learn on Wednesday that you were made aware of serious allegations of sexual assault against Chris Pincher and that, despite this, you went on to appoint him”.

Peter Gibson PPS to the Department for International Trade
“It is of the utmost importance that the Office of Prime Minister represents all the high standards required of public life, which I do not believe it presently does.”

The 5 MPs that stop in a single go

“It has become increasingly clear that the government cannot function given the issues that have come to light and the way in which they have been handled.”

Neil O’Brien Minister for levelling up, the union and structure

Bim Afolami Vice-chairman of the Conservative occasion for youth

The international warfare for expertise