Home NEWS Quinton de Kock Who "Fake Fielding" due to which Pakistan lost by...
NEWS 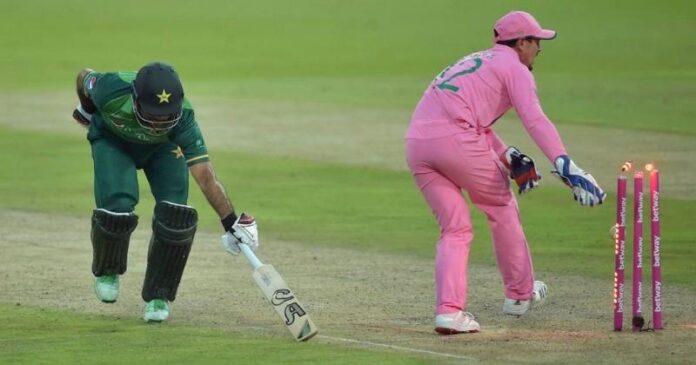 Although cricket is called a Gentlemen’s Game, but on many occasions, players consider the game to be a war and adopt the policy of ‘Ishq and Jung is all justified’. Whenever the principles of cricket are broken in this way, then a big debate takes place in the cricket world. It is obvious that on many occasions the Pakistani cricket team has tried to tamper with the rules of cricket, but this time the Pakistani team had to fall prey to the conspiracy of the front team, after which a new controversy arose. is. So let us tell you what is this dispute and what damage did the Pakistani team suffer from it:

On the day of cricket, some kind of controversy comes out about which most of the cricket lovers do not know. A similar controversy arose in the one-day match played between South Africa and Pakistan on April 4. It is a dispute of fake fielding, in which the batsman is confused and dismissed by the fielder. Something like this is rarely seen in cricket. This is the reason that whenever it happens, it becomes a hot topic for the cricket world. Due to fake fielding in this match, Pakistan had to lose the wicket of one of their batsman who was close to completing his 200 runs at that time.

See The complete video how Quinton #dekock mislead #fakharzaman @ICC during Run out complete shame calling a cricket as a Gentleman game 😡😡😡 pic.twitter.com/E3eZLEsEz0

This was the second ODI match of this tour which was being played in Johannesburg. In the first innings of the match, South Africa batted brilliantly and put a huge score of 341 runs ahead of the Pakistani team. The wickets of the Pakistani team came down one after the other to chase the target, but Fakhar Zaman, standing at one end, kept Pakistan in the game till the end. He played Pakistan’s 312 runs while playing a 193-run Shanad innings. Although Pakistan needed 31 runs to win in the last over, which was very difficult, but despite this everyone’s hopes were rested on Fakhar Zaman.

Zaman, who was batting on a personal score of 192, ran to take the first ball of the 49th over, after taking the first run, he ran for the second run. Edim Markram, standing in deep long off, on the other hand, threw the ball towards wicketkeeper Quinton de Cock. Zaman would have easily completed the run, but at the same time Quinton Dickock pointed towards the non-striker end as if he was asking the fielder to throw his hair there, while the throw of the ball was made on his side. After this false gesture, Zaman started looking back and his speed slowed down. At this very moment the phrase ‘Nazar Hathi Accident Happened’ proved to be true and the ball went straight to the wickets. Due to speed slow the bail could not reach the crease due to which he was declared out. After the bail out, the Pakistani team was able to score 324 runs and lost the match by 17 runs.

What do the rules say?

Fakhar Zaman’s run out cost Pakistan 7 runs and a ball. Under the rules, PAK should’ve received 7 runs (two by Fakhar and 5 penalty). Plus, the ball should have not been counted as it was dead.

The players or the onfield empire may forget, but in cricket there are rules about everything. Rule 41.5 for fake fielding states that ‘it is wrong for any fielder to deliberately divert the attention of the batsman. In this way, it is considered wrong to interrupt the batsman in taking runs with his words or gestures. According to Rule 41.5.2, it is the responsibility of the onfield empires to decide whether or not to mislead, distract attention or create obstruction. The rules say that if the Empire fielder is found guilty of fake fielding, then he can declare the ball dead by declaring the batsman not out, and with this, the batting team is given 5 runs. But in this match, the attention of the Empire did not go to Fielder’s mistake, due to which the Pakistani team lost as well as Fakhar Zaman also missed his double century.

After yesterday’s match, there has been a debate on this issue in the cricket world. Many people on Twitter have criticized Dickock for denying this action.

Facebook
Twitter
Pinterest
WhatsApp
Previous articleAnand Mahindra is richer than heart! The time when Anand Mahindra won the hearts by helping people
Next articleAnil Deshmukh, who resigned on charges of recovering 100 crores, is the owner of so many crores, along with Reliance, he has invested money here

How to get duplicate copy if you lose your Aadhaar card, know the easy way

If you lose the Aadhaar card, you can apply for a duplicate copy of it on...
Read more

In Today’s world, every time you look around you there is an Indian woman with an entrepreneurial dream. Earlier, women use to stick with...
Read more

How To Earn Money by TikTok Business Model?