Home NEWS March 28: From the politics of Bengal to the thrill of cricket,...
NEWS

March 28: From the politics of Bengal to the thrill of cricket, read today’s 5 important news 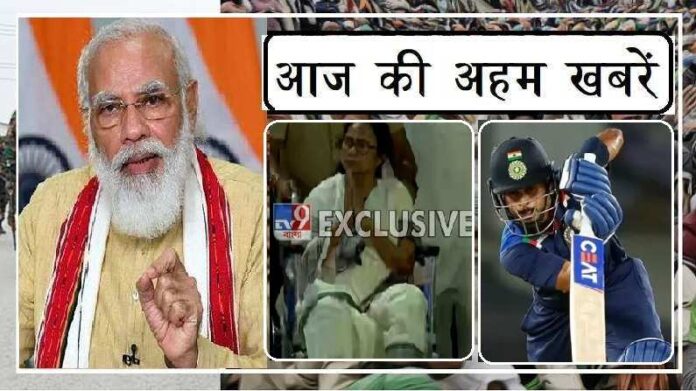 Here in Today Top 5, we are telling together five such important news of the day, about which it is important for you to know. You can also read the whole news by clicking on the link given below the news.

There are many such incidents in the country and the world every day, which become headlines throughout the day. From TV to Internet… There are many such important news in the crowd of news going on throughout the day, which gets missed from us and we many times Important developments Don’t know about Today Top 5 Here we are telling together Five such important news of the day, which is important for you to know. You can also read the whole news by clicking on the link given below the news.

PM Narendra Modi said in the Mann Ki Baat program, farmers should do modern farming, emphasis on tourism too

Prime Minister Narendra Modi on Sunday spoke to the nation with Mann Ki Baat. This year it was the third edition of Mann Ki Baat and was the 75th episode of the monthly radio program. During this, PM Modi mentioned the Janata curfew and appealed to the common man to remember the mantra of the fight against Corona. Apart from this, he emphasized on light house tourism in the coming times. He insisted on adopting modern technology for farming.
Click to read 10 big things

Union Home Minister Amit Shah’s claim of BJP winning 26 out of 30 seats in the first phase of assembly elections in West Bengal was rejected by Trinamool Congress chief and Chief Minister Mamata Banerjee on Sunday, saying that the public verdict is known after the counting of votes. Will go. Amit Shah claimed this in a press conference at his residence in Delhi during the day. Although Mamata Banerjee did not take Shah’s name, she questioned how such a claim could be made only a day after the elections were held.
Click to read full news

In the investigation of the Ambani Explosive Case, today (March 28, Sunday) again a new revelation has been revealed. The NIA team with accused police officer Sachin Waje reached the Mithi river bridge near Mumbai’s Bandra Kurla Complex. The NIA team found many evidences in this search operation and many new revelations came out. In search of evidence, about 11 divers and scavengers were lowered into the river. In this action, 2 CCTV DVRs were recovered to divers. Apart from these, two CPUs, a hard disk and two fake number plates have been recovered. Also a printer has been recovered and a laptop has also been found.
Click to read full news

The last match of the 3 ODI series between India and England is being played in Pune. England did not have a good start in response to the target of 330 runs from India. The team lost 6 wickets for 168 runs in 26 overs. Earlier, Rishabh Pant, Shikhar Dhawan and Hardik Pandya played a brilliant innings. At the same time, Rohit Sharma, Krunal Pandya and Shardul also contributed well.
Click to read live cricket match updates

Last year (2020) a video went viral in which around 100 dogs were allegedly poisoned and killed in two days from Siddipet district in...
Read more

Insurance Regulatory and Development Authority of India (IRDAI) has alerted the general public to fraudulent phone calls. The regulator has told the public that...
Read more

Startup Idea – You Can Start Your Business in a Free

These days startups phase running in the country. Youth studying in IITs and IIMs are leaving their jobs worth millions and entering the startup...
Read more

The industries revolve around the needs of customers and consumers have given utmost value in the consumer product industries. The variety of the same...
Read more
Load more