Health Minister Dr. Harsh Vardhan and his wife took the second dose of the vaccine, sharing their experiences 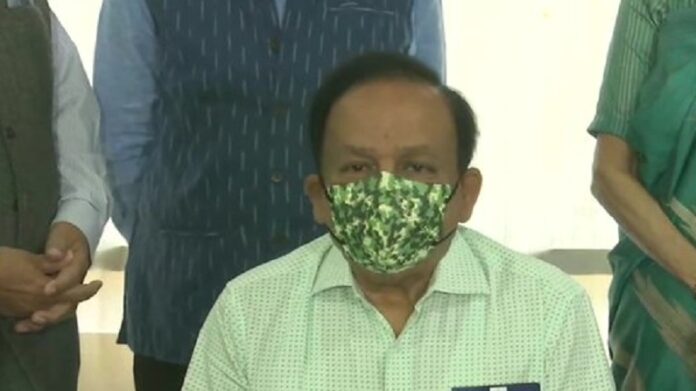 Health Minister Dr. Harsh Vardhan said, “Today I have taken the second dose of Covid Vaccine with my wife Nutan Goyal. Neither of us has any kind of any side. No effects. ”

Dr. Harsh Vardhan said, “Today I have taken the second dose of COVID vaccine with my wife Nutan Goyal. We took the first dose on March 2 and have taken the second dose after 28 days. Neither of us has had any side effects of any kind. Both vaccines are safe in India. Many people still have many doubts and they have many misconceptions about the vaccine. I would like to say that scientists have prepared it. No one should be in any kind of confusion or misunderstanding. “

“Do not be negligent after taking the vaccine”

At the same time, some people are taking great care after taking the vaccine, that is, they are not following the precautions like wearing masks and maintaining social distancing. Regarding this, Dr. Harsh Vardhan said, “Even after taking the vaccine, it is necessary to use the mask properly and follow all the COVID protocols. Negligence is not to be taken after the vaccine. ” He said that we should stay away from the super spreader event. Regarding the positive cases that are increasing right now, I want to say that you should follow all the measures to avoid COVID. ”

With this, he told that from April 1, every person above the age of 45 years in the country will be vaccinated. Appealing to the people, he said, “I request you to register in large numbers.” After noon, you can also go to the vaccination center on foot, where your registration will be done. “

Corona infection has the highest impact in 8 states

The second wave of Corona is being seen in 8 states of the country, including Karnataka. Maharashtra, Karnataka, Punjab, Madhya Pradesh, Gujarat, Kerala, Tamil Nadu and Chhattisgarh are reporting the highest number of corona cases every day. Regarding this, he said, “Maharashtra and apart from this, four to five states account for 85 to 90 percent of the total cases across the country. I repeatedly say that it is most important for us to follow the strategy of test, track and treatment. “

2,434 Labs for Corona Test in the country

He told that 2,434 labs have been built in the country where millions of tests are being conducted in a day. Guidelines are being issued in all states from January 17, 2020. At the same time, the Prime Minister, the Cabinet Secretary and the Chief Secretary of the States are in constant dialogue with the Health Minister. Vaccine is being given through the Kovin platform across the country. ” At the same time, when he was asked when Prime Minister Narendra Modi (PM Narendra Modi) will take the second dose of the vaccine, he said that at the moment it is difficult for me to tell.

read this also – So .. that’s why India became part of Myanmar’s Army Day Parade, know what the compulsions were

In this entire article, 40 such agricultural-related business ideas have been given, which can be made with less capital investment. It is important to note...
Read more

Mistakes Entrepreneurs Do After Receiving Funding

Fundraising refers to be a common thing in today’s startup ecosystem a startup keeps on rasing funding regularly. However, the actual problem comes into...
Read more

Startup Street: A Glimpse Into How Covid-19 Hit Fintech Funding

We are sure that by now everyone knows how much the coronavirus has affected economies all over the world. Almost all businesses are shut...
Read more

How To Earn Money by TikTok Business Model?