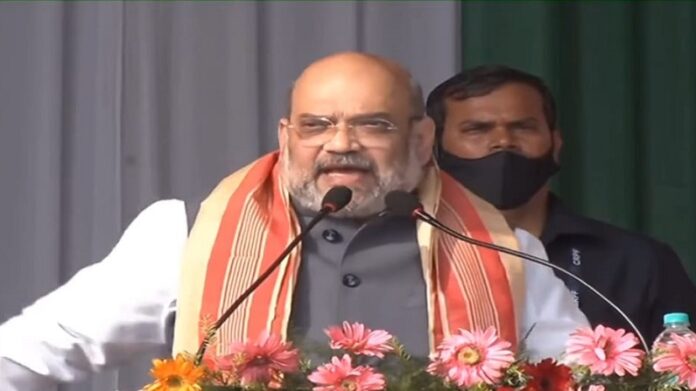 Amit Shah said that elections were held peacefully in the states which were known for elections amidst violence.

After the first phase of voting in West Bengal and Assam, Union Home Minister Amit Shah held a press conference today. During this, he said that in Assam, the Bharatiya Janata Party (BJP) is getting huge public support. Home Minister Shah has claimed to win 37 out of the 47 seats in the first phase in Assam. With this, he said that in the two states which were known for conducting elections in the midst of violence, elections have been conducted peacefully under the leadership of BJP today. Shah thanked the people of both the states and said that heavy turnout is showing immense enthusiasm of the people.

During this, Shah said, “Out of five states elections yesterday, two states have held the first phase of voting. For this, I want to express my gratitude to the people of both the states, who have voted as much as possible. More than 84 percent turnout in Bengal and 79 percent turnout in Assam shows that there is a lot of enthusiasm among the public. These two states, Assam and Bengal, were known for electoral violence, but this time elections have been held in a peaceful manner. I claim that BJP is winning in Bengal with a thumping majority. In the first phase elections, BJP will win more than 26 seats out of 30. ”

A ray of hope aroused in the people of Bengal

He said, “Just as there was an atmosphere of Tustikaran inside West Begal, the unrestrained infiltration continued, the way the ruling party fell prey to corruption and usurped the rights of the people, the fight against Corona Ho, etc., the people of Bengal have received severe disappointment in all of this. After 27 years of communist rule, the people of Bengal hoped that Didi would bring a new beginning, but the party’s symbol and name changed, but Bengal remained there but it has declined further. “

“Auspicious signs for both the states”

He said, “We have been successful in creating a ray of hope in the minds of the people of Bengal. The BJP will form the government in Bengal with more than 200 seats, I and all the workers have full faith in it. At the same time, the development which has taken place inside Assam under the leadership of PM Modi, is seen getting a huge public support. The construction of more than 6 bridges on the Brahmaputra river, freeing Kaziranga land from intruders, a lot of examples show a positive bias in elections.

He said, “With more seats than we have in Assam (Assam), we will form an absolute majority government. I congratulate the Election Commission that they have succeeded in conducting peaceful voting for the Election Commission in Bengal. It is happening after many years that without any death, without bombings, without re-voting, the voting process is complete. These are auspicious signs for both the states. “

read this also – Petrol and diesel ‘cheap’ due to elections, Rahul Gandhi’s taunt on government for cutting prices

The next week is going to be an important meeting of NITI Aayog officials, officials of...
Read more

NPS-National Pension System: In order to activate a frozen NPS account, you will have to pay...
Read more

During this pandemic and after this as well, people will be searching for different business ideas. Many of them must be planning for big...
Read more

How To Start Saving Money For a House?

Buying a house before turning 30 may just be one of the most common financial goals. However, having your dream house isn't just fanciful;...
Read more