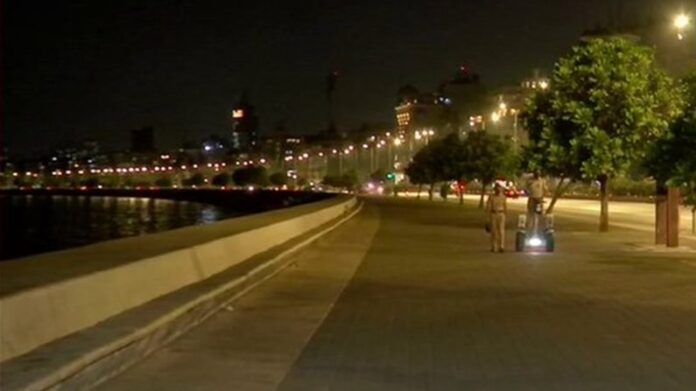 Chief Minister Thackeray gave instructions to prepare such a scheme with regard to the implementation of lockdown, which will affect the economy least.

The highest number of 6,933 new cases were reported in a single day on Sunday in Mumbai. (Photo-ANI)

Before Holi, Corona Virus Pandemic has shown its color. A record number of coronas have been found infected in the national capital Delhi (Delhi) and the financial capital Mumbai (Mumbai) on Sunday. After the arrival of 40,414 new cases of corona virus infection in Maharashtra on Sunday, the total number of infected people has increased to 27,13,875. The state health department gave this information. On March 25, the number of cases in the state reached 26 lakhs. The department said that due to the death of 108 more patients due to COVID-19, the number of dead has increased to 54,181.

The total number of cases in Mumbai has increased to 3,98,724 after the maximum number of 6,933 new cases reported in a single day on Sunday. The department said that due to the death of eight more patients due to this epidemic in Mumbai, the number of dead has increased to 11,653. In Maharashtra, 17,874 more people were discharged from hospitals during the day, taking the total number of healthy people in the state to 23,32,453. The department said that 3,25,901 patients are currently being treated in the state.

More than 1800 new infected found in Delhi on Sunday

More than 1800 patients of corona virus were confirmed in Delhi on Sunday, which is the highest number of cases in a day in the last three and a half months. At the same time, 9 infected people died. The Health Department said that the total number of infections in the national capital has reached 6,57,715 while 11,006 people have died due to the virus. The department said that 6.39 people have also become free from infection. According to official figures, on December 13 last year, 1984 new cases came in one day.

Work on the plan to put a lockdown in Maharashtra

Chief Minister Uddhav Thackeray issued some important instructions on Sunday in view of increase in cases of Corona virus infection in Maharashtra. CM Thackeray directed to prepare such a plan to implement the lockdown on the recommendation of the workforce on COVID-19 in the state, which will affect the economy the least. This information was given in an official statement. According to the statement, in a meeting with officials other than the Chief Minister and Health Minister Rajesh Tope, the members of the workforce expressed apprehension about 40,000 new cases coming up in the state in the next 24 hours.

During this, Principal Secretary of the State Health Department, Dr. Pradeep Vyas said that in the coming days there will be huge pressure on the number of beds, oxygen supply and ventilators. Also, if the number of cases increases, then they may also have to face a shortage. During the meeting, the Chief Minister reviewed the other health related preparations, including the availability of beds, medicines and oxygen for the treatment of COVID-19 patients.

According to the statement, the workforce recommended a strict lockdown in the state to prevent the spread of infection. Accordingly, later the Chief Minister directed the officials to prepare such a detailed plan regarding the implementation of the lockdown, which would at least affect the economy. The statement quoted the Chief Minister as saying, “There should not be any confusion among the people when the lockdown is announced.”

Man refuses to give alimony to wife, Supreme Court jailed for three months

Facebook
Twitter
Pinterest
WhatsApp
Previous article‘Corona vaccine to be given for Odisha’, Center statement after state complaint
Next articleTerrorists have been shot, disabled for age, despite hundreds of people take care of Javed

How To Get a Working Capital Loan in India?

Sometimes new and small businesses need help to grow in the business world. But most of the time not having enough money becomes a...
Read more

Your PAN card will become useless… or else all the work related to money will be stuck, only a few hours are left

Make sure to get your PAN card linked to Aadhaar. If this does not happen...
Read more

To prevent empty, waste plastic bottles and single-use polythene from entering the natural water source or soil, they need to be properly managed. However,...
Read more

President Ram Nath Kovind was admitted to the Army Hospital in Delhi on Friday after complaining...
Read more

This scheme is for 10 years and the minimum entry age is 60 years. ...
Read more
Load more