Amid growing corona, the country’s first private train Tejas Express closed again, is the railway track going to be resumed? 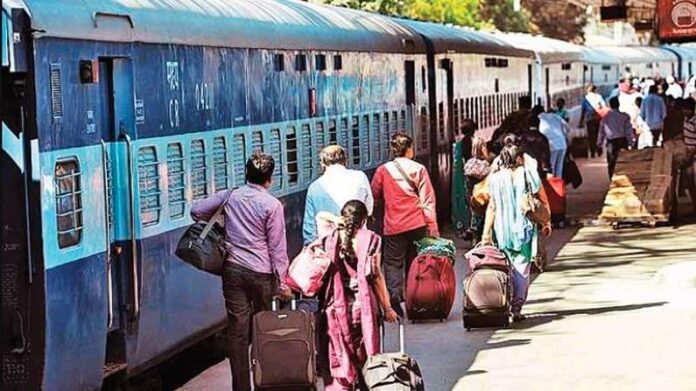 IRCTC has decided to suspend the service of Tejas Express, the country’s first private train running between Ahmedabad-Mumbai Central-Ahmedabad for a month, due to increasing cases of Corona.

The possibility of braking is also increasing at Mumbai Local.

Corona cases are again increasing. Due to this, local lockdown has also increased. Meanwhile, Indian’s first private train Tejas Express has been braked. IRCTC has decided to stop the operation of Tejas Express running between Ahmedabad-Mumbai Central-Ahmedabad from April 2. This train will not be operated for the next one month.

Corona is spreading at the fastest speed in the country’s financial capital Mumbai. The possibility of braking is increasing at the Mumbai local, called the lifeline of the metropolis. The mayor of the city, Kishori Pednekar, has warned of stricter restrictions from today. The mayor has also indicated that as before, trains can also be opened only for the staff associated with essential services. Medical experts say that since the service of the local train has been restored, the cases of Corona have increased rapidly. Let us know that the Chief Minister has already indicated to impose complete lockdown in the state. So far no official announcement has been made regarding any stringent lockdown.

Tejas Express suspended for one month

Regarding the closure of the Mumbai-Ahmedabad Tejas Express service, a Western Railway spokesperson said that this service is being suspended for a month from today. Passengers who had booked tickets for April 2 or later, have been informed about this. Refund of their tickets will be released soon.

At the same time, Indian Railways is preparing to start passenger train services completely. It is believed that it will start operating in the next two months. These trains will be run in the same states where the governments will approve it. Apart from this, passenger trains will be allowed to run in the places where COVID-19 will be under epidemic control. According to a PTI report, 66% of train services are currently being run as special trains.

Also read, big news for the customers of these two state-owned banks, these codes have been closed since April 1, the user IDs have also changed.

In the present time, every single person is struggling and barely making the end meets. No matter which class you belong to, your life...
Read more

If you also invest in Mutual Fund, then read this news

Franklin Templeton Mutual Fund has stated that it is committed to the Indian market and has...
Read more

In his petition, Ramesh Chennithala, the leader of the opposition in Kerala (Kerala), demanded action against...
Read more

How To Start Advertising Agency Business?

Advertisement or Ad Agency Business Idea, know about this business, a great option to earn money. Along with the modern era, the era of advertising...
Read more

Seeing the guards eating rice with onion-garlic, just mind it, isn’t it? Come forward to help someone?

A picture has gone viral. In this, a person who is a security guard by profession is seen eating cooked rice with onion and...
Read more
Load more