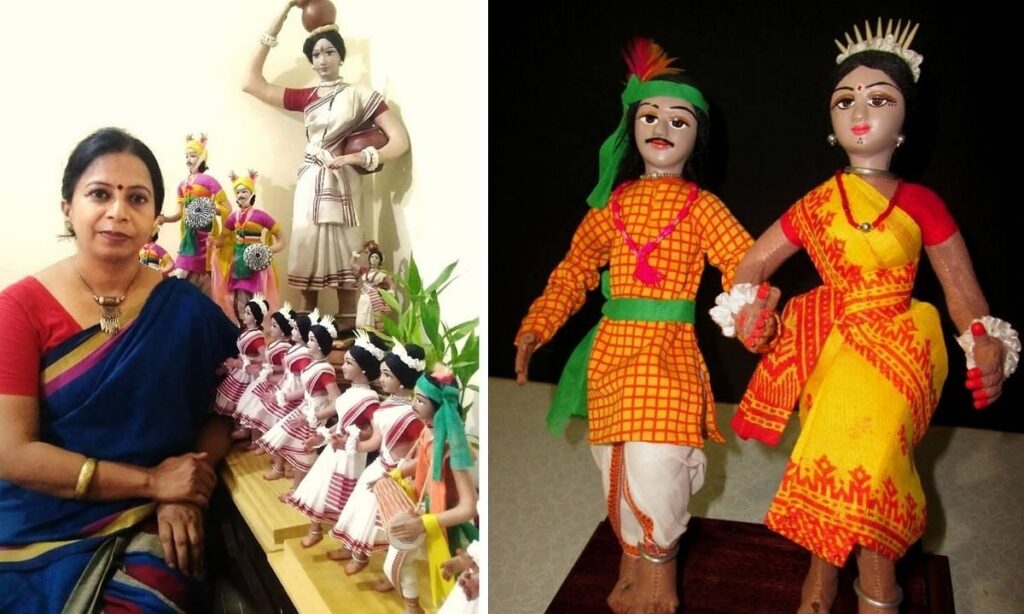 If you use your skills properly, then you can give employment not only to yourself but also to others. As Shobha Kumari, 48, hailing from Ranchi, Jharkhand, is doing. The story of Shobha Kumari is a classic example of Vocal for Local. For the last 27 years, Shobha is not only self-sufficient but she has taught more than a thousand women the tricks to become self-reliant.

Shobha Kumari, who specializes in various arts, has studied till the twelfth and today runs a business of her own in handcraft (handicrafts) products. She has a talent for embroidery, sewing, painting and making a wide variety of artistic things, from dishes like Badi, Papad. For some time now, he has been receiving much appreciation for his art of making ‘dolls’ of a particular kind. Shobha makes these dolls by hand, which are beautiful to look at and are also environmentally friendly. She uses clay, cloth, and rice bran etc. to make them.

Shobha told The Better India, “I have been interested in different types of handicrafts and crafts since childhood. I used to try to learn everything new that I saw in my childhood. Since school, I have been doing sewing, embroidery and handicrafts. Today, the slogan of ‘self-reliance’ is being given everywhere. However, my parents explained to me the importance of self-reliance only when I was studying in ninth grade. He taught me that no matter what you earn, you should know how to earn. Also, I was so much interested in this work that I continued to learn them. ”

Shobha has employed 40-45 women through her organization, Srujan Handicrafts. According to the skill of all these women, Shobha has given them work by training them. Shobha says that it is not enough to give training to make something, but she also teaches these women the tricks of starting a business and marketing their products.

Shobha trains women of poor and needy classes for free. She says that she only trains women who need work and who want to start their own work after training. She further added, “To train these women, I have to take time apart from my busy schedule. Therefore, I like to give this time to women who really need employment. ”

Many women who have taken training from them, have started their work today. They make and sell different products from their homes. Saroj Khalkho, 38, says that she has been working with Shobha for almost 12 years. He has learned sewing, embroidery and making dolls etc. from Shobha itself. When she started work, she wanted to earn just Rs 800-1000 a month so that she could get some help at home. Her husband was a gardener and at that time there was a lot of financial crisis in his house.

However, today the picture of his family has changed completely. She earns 25-30 thousand rupees a month and today she also has her own scooty. At the same time, Suman Careketta (38), a woman, used to work as a daily wage laborer ten years ago. But today, apart from working with Shobha, she also makes and sells her own products. Due to which she earns 30-35 thousand rupees every month. She says that now in this work, her husband is also supporting her.

Shobha says that other women who work with her also earn 10-15 thousand rupees a month. They have divided the women into different groups. Some women make products and some women sell them.

Stalls put vegetables in the market

About the marketing of the products, Shobha says that initially, she used to sell her products from door to door. But, then more customers were added through the customers. Apart from this, she and her women’s team also set up their stalls in all kinds of fairs and haats in the city.

Sobha says, “There is also a weekly haat, where people come to buy fruits and vegetables. We have the highest sales there. It is also a message that it is not necessary that you can sell things only by opening a big shop or showroom. You can also work in such places by placing a small stall. You can also do a better job, at least in the means. ”

After the Vocal for Local campaign last year, Shobha received much acclaim. Now his work has increased even more. She says, “My family is thriving and I didn’t have to work.” But I believe that the need is not just your own but you should also think about others. If you have any knowledge or skills, then try to make others self-reliant. When only two-four people will get employment from your work, only then will the dream of self-sufficiency come true. ”

His annual income from this work is in millions. But, Shobha says that she has more satisfaction than earning money, given that she has empowered hundreds of women. In the end, she says, “It is not necessary that you start earning when you need money in your house.” Earning money gives you a different kind of freedom, especially women. So whatever be it big or small, you must do some work. ”

Click here if you want to see dolls made by Shobha Kumari. You can email them at srijanhandicrafts@gmail.com to contact them.

Read: Innovation of college students! Made such clock, inside which CCTV camera will be hidden

Female Entrepreneur
Previous Article‘Government of Karnataka to withdraw cases registered against BKU leader Rakesh Tikait’, said Kumaraswamy
Next Article New update on the rate of petrol and diesel! What is the connection, disaster or relief from the traffic jam in the sea?