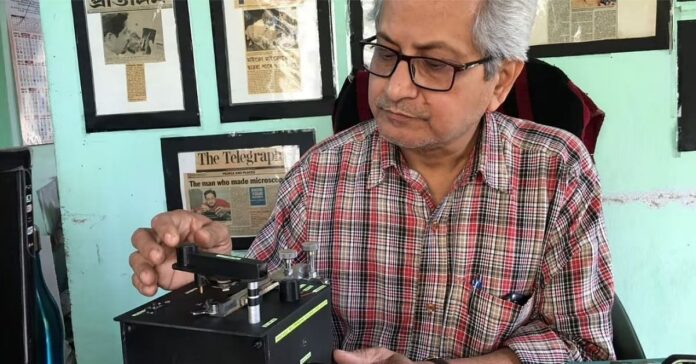 Indian scientists have made thousands of inventions like this. But, today we are going to tell you about an Indian scientist who surprised scientists all over the world with his various inventions. We are talking about the inventor of Howrah, Dr. Ramendra Lal Mukherjee.

Dr. Ramendra was four years old when he visited his grandfather’s house during the summer holidays. One afternoon while he was sleeping, all the doors of the room were closed. Curtains of windows were also installed and the entire room was covered with darkness. There was only a small crack in the door from where a streak-like sunlight was coming. Ramendra followed that streak of light, to the wall just in front of the door. The wall of the room was transformed into a cinema screen, from which the movement outside the room could be seen. Ramendra’s family was asleep, but with that streak of light, he could see everything outside the room (cart, cow, people and trees). The room had become a pin-hole camera.

Then Ramendra had forgotten the rest of the afternoon. He was now drowned in the thought that what he saw could be repeated. He picked up his grandmother’s white cough syrup box and took a safety pin from his mother. Then they made a small hole on one side of that compartment so that the light could go in and made a big hole on the top so that they could see inside. Now he could see trees, people, carts and cows etc. from inside this small camera.

Ramendra Lal Mukherjee, 59, recalls, “Years later, when I was in eighth or ninth grade, I first read about the pin-hole camera. And then I realized what I had made. ”

Dr. Mukherjee lives in Howrah with his wife and son and is known as the “serial inventor”. To his name, there are over 30 international patented inventions so far. These include ‘Lie Detector’, ‘Stone Analyzer’, ‘Electronic ENT Scope’, ‘Transmission Electronic Microscope’ and ‘Portable Auto Scope’ for ear inspection.

Planter made from waste, plants planted with cuttings! Learn ‘Zero Budget Gardening’ from them

His most prolific invention is the ‘Micro Microscope’, which he made in 1998. For this, he was awarded the ‘National Award’ by the Government of India in 2002 on Technology Day. This invention has also been accepted and recognized by the ‘World Intellectual Property Organization’ in Geneva, Switzerland.

The story of this ‘Micro Microscope’ is from the year 1975. Businesslend Talking with Dr. Mukherjee explains, “When I was in ninth grade, my brother gifted me two lenses. I was reading a newspaper one day and playing with a lens and then I noticed that when looking in that lens, in a particular position, the letters looked big. ”

The first version of this microscope, a 400-gram box of QT Talcum powder, was made using two lenses, a wooden block and a switchboard, and some other items taken from home. With this ‘microscope’, Dr. Mukherjee looked at a mosquito and found how clearly the mosquito’s blood cells were visible. With this new invention, he approached his biology teacher, who was quite keen to see this. To see the invention, a group of students and professors arrived at his home. Dr. Mukherjee was told that he had made a compound microscope. Dr. Mukherjee says, “I had never seen a microscope before.” I studied in a Bengali medium school and there was no such machine. ”

Dr. Mukherjee says, “My research and work started from the same day.” Later as an engineering student and in his subsequent jobs, he worked on modification and fabrication on the microscope. He says, “I wanted to build a microscope that could grow to levels similar to a compound (which goes up to 100%).”

In 1985, Dr. Mukherjee started working at HCL. During this time, he reached the senior position. But he always felt lack of time for his research. He says, “I couldn’t find a lot of time for my research and the making of a microscope.” I would return home around 11 o’clock and the next day, office would start again at 7 o’clock in the morning. I decided to quit my job in 1997 so that I could devote all my time to this microscope. ” By this time, about 90% of Dr. Mukherjee’s work on the microscope had been completed. And he had completed his project by 1998.

This invention became available to everyone in the same year, for which Dr. Mukherjee got his patent and was recognized by many Indian newspapers. About 50 thousand microscopes have been sold in India and abroad. It is pocket-sized, suitable for field study and can be used by any student since the second grade. It can work for up to a year with one hour usage daily. Dr. Mukherjee also works in many NGOs and many teacher training workshops to showcase his inventions. He says, “The process of applying for an invention and patent is very expensive. All the proceeds from this invention, I use for my other invention. ”

Along with this, Dr. Mukherjee was also working on other instruments. One of these was a portable ECG machine. During his posting in Chandigarh, he was strongly encouraged by the general manager to work on his research after his office hours. Dr. Mukherjee says, “At the time, these machines were bigger than a fridge. My idea was to repeat it on a smaller scale. ”

JOHNY HOT DOG: Decided to travel from 8 rupees to 3 crores, KFC and McD also left behind

More recently, even during the Corona epidemic, they have built something. He says he has designed a smartphone-shaped ‘UV sterilizer’, which can clean anything within a second. A larger version of this device is being used for hygiene by the Birla Planetarium and cinema halls.

In 2010, Dr. Mukherjee made a microscope. He claimed that it could do the work of all microscopes. This meant that the device could function as a ‘transmission microscope’, ‘scanning microscope’, ‘polarizer microscope’, ‘metallurgy microscope’, etc. He applied for a patent for the device that year, and his prototype was destroyed. Because, for other inventions, he needed some parts that he was working on. But his patent came to a standstill. He says “I sent my papers to many countries and scientists didn’t believe that this microscope could actually do what I was claiming.”

In 2020, the Controller of Intellectual Property Office (headquartered in Kolkata) wrote a letter to Dr. Mukherjee asking him to display the device within seven days. “I was stuck,” he says, because I destroyed the prototype long ago. Also, I had to make sure that the prototype I would send would be the same as what I stated in the patent. Everything should be the same, from size. ”

“This is part of me”

As a serial inventor, he worked day and night for seven days when his reputation was jeopardized. Within seven days his prototype was ready. With his model he went to the Patent Office and performed microscope functions. Within two days, he had his patent certificate in his hand.

In November 2019, he received a call from the ‘Department of Environmental Sciences’, Government of India, requesting him to make a microscope. Which can detect ‘microplastics’ in water, for an expedition to Antarctica. But, the difficulty here was that it had to be ready in three weeks. He says, “Of course, it seemed impossible but, I made it within two weeks.”

Dr. Mukherjee says, “But the challenges surrounding this work keep pushing me forward. I work hard to make the impossible possible, no matter how challenging it may be. I always work on my inventions. When I sleep, I still dream of new inventions. I do my research work before and after office hours. I always wonder what to do next. ”

Dr. Mukherjee remembers the time when he quit his job at HCL. His son was only one and a half years old at the time. He says, “Working on these inventions has been a big part of my life since childhood. This would not have been possible without the support of my wife, Vaishali. My family has also fully supported me in this. ” In 2019, Dr. Mukherjee was awarded the ‘Personality of the Year’ award for his work in his field. He considers ‘All-in-One Microscope’ as his greatest achievement, which he fought for a decade to get recognition.

Facebook
Twitter
Pinterest
WhatsApp
Previous articleJOHNY HOT DOG: Decided to travel from 8 rupees to 3 crores, KFC and McD also left behind
Next articleBig news: now both the withdrawal and deposit from the Post Office will be charged, a new rule will be implemented from April 1

Finance Minister Nirmala Sitharaman said that in 2014 India was one of the countries with five...
Read more

A scientist from Kerala became a farmer, planted 800 such exotic fruits

This is the story of a Kerala scientist who left his job to return to his village to serve his ailing mother. After returning...
Read more

How To Start Tissue Paper Business in India?

The lifestyle of people is changing with time. Due to Coronavirus, most people are focusing on cleanliness. In such a situation, the demand for...
Read more
Load more