Earlier, he used to pay Electricity bill of Rs. 10000, now billed due to installation of ‘On Grid Solar System’ 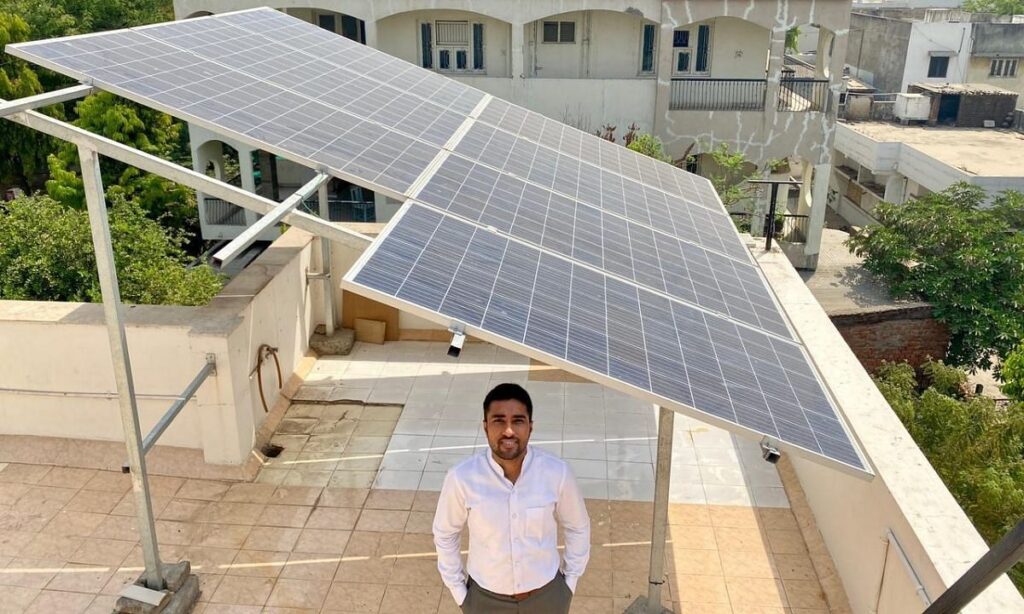 Have you ever read the 17 ‘Sustainable Development Goals’ set by the United Nations Development Program (UNDP), or taken any initiative at the private level to accomplish any of them? If not, read this story of Dr. Dilip Singh Sodha, an oral surgeon from Gujarat who has installed ‘Solar Panel Installation’ in his home, who with his small efforts contributed to achieve these goals. Are giving

Whereas, on the one hand, most people feel that the responsibility of meeting such goals towards society and environment lies with the government, administration or organizations like United Nations. At the same time, Dr. Dilip Singh Sodha, an oral surgeon from Ahmedabad, is telling how even a common citizen can contribute to it.

Dr. Dilip Singh, 31, says, “It is true that we cannot do everything right in one day. But, because of this, if we do not take any initiative then it would be wrong. I have made a very small beginning but, I know that if I keep doing this for a long time, it will surely be in the interest of our environment. ”

After completing his studies in the year 2015, Dilip Singh decided to take the UPSC exam. For this, he also spent a year and a half preparing. He explains, “I once prepared for the UPSC exam but could not pass. During its preparation, I read a lot, which increased my understanding and awareness of my country, society and environment. I started my practice as an oral surgeon in 2017 and started my own clinic in 2019. Also, as a citizen, I decided not only to know my rights but also to perform my duties. ”

Lightning Of for Pursued Solar Energy

Dilip Singh says that electricity consumption in his home is less in winter and more in summer. In general, their household consumes about 1000 units of electricity in 60 days. To reduce their dependence on electricity coming from the grid, they have installed solar panels of five kW capacity on the roof of their house.

He says, “Our house has three ACs, five-six fans, lights, fridges, washing machines and other kitchen appliances.” Before the installation of solar panels, the electricity bill of our house in the summer was more than ten thousand rupees. But now our electricity bill is almost zero. ”

He adds, “After we got the subsidy, the cost of the solar system came to Rs. 1,65,000. The additional cost of installing this solar panel was about Rs 25,000. But given the way our dependence on the power company has ended, it seems that we will recover its cost in about three years. So adopting solar energy is a good option not only for the environment but also to reduce the cost of electricity. ”

While advising people to adopt solar energy, he says that you should talk to two-three companies in your area and know about their service. Then you can install solar system from where you feel right. Also, you do not have to worry about subsidies as many companies, along with installing solar systems, also complete the subsidy related process themselves. This does not cause much trouble to the customers.

Along with adopting solar energy, Dilip Singh and his family are making efforts to increase greenery and reduce pollution at their level. In August 2019, he planted 17 trees along the road, outside his house. Whom he and his father, Naranji Sodha, look after regularly.

Dilip Singh says, “There are many trees in our house and with these trees we can clean the environment around us. Therefore, I and Papa together planted 17 trees on the roadside, outside the house and To protect them, ‘treeguards’ have also been installed. Every day in the morning, we water the trees and every Sunday we clean around them. ”

Dilip Singh says that many people also put garbage inside the ‘treeguard’, which he cleans. All their planted trees are growing well. Apart from plantation, he has also started composting at his home from April 2020. By digging a pit in his garden, he is making compost from all the organic waste in the house.

His father, 57-year-old Naranji Sodha, says that by making compost, we can, to a great extent, reduce the waste coming out of the houses. This will also help the administration and with this manure we can also plant new plants. If all citizens start participating in this process then we can prevent organic waste from going to landfill.

Apart from this, he told that he has his farm in village Achhwadia, Banaskantha, which is maintained by a local family there. There they have also built a house, in which they have planted 33 trees and to provide water, drip irrigation has also been arranged. They say that wherever they see potential, they try to plant saplings.

Further, Dilip Singh says that he ‘Paddle power are associated with a cycling group called ‘. The group has more than 50 members, who cycle regularly. Along with this, Dilip Singh and some of his colleagues have also started a ‘Car Free Day’ initiative.

He says, “From my house, the distance to my clinic is about seven km. One day a week, I go by bicycle instead of my clinic car. This is a very small step. But I know that if I continue this small initiative for a long time, it will be beneficial for the environment somewhere. ”

He has been following ‘Car Free Day’ for almost five months and aims to keep doing this for eight to ten years to come. He sets very small goals for himself and tries to achieve these goals in the interest of society and the environment.

In the end, he gives just this message, “No country in the world is perfect.” But, it can be tried every day to make them better. As a citizen, it is our right to highlight the shortcomings of the government and the administration. But at the same time, we should also perform our duties towards the society. It is my endeavor that I will continue to contribute to achieve the ‘Sustainable Development Goals’ as much as possible. We all should also make such efforts. ”

If you want to contact Dr. Dilip Singh Sodha, you can email him at dilipsingh.n.rajput@gmail.com.