Duty of doctor along with duty of IPS, free medical facilities extended to 5000 tribals 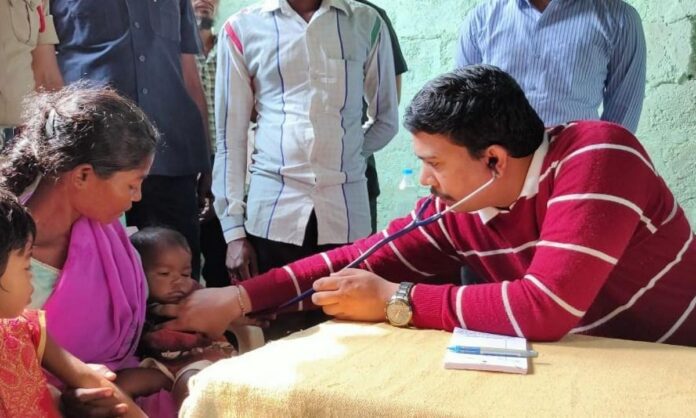 The suspicion and fear in the minds of the people about the police officers is gradually coming to an end but rightly. The reason for this is that some officers of the police department who are working for the needy by going to the grassroots level. There are many officials who are connecting with people through social media. The lives of many people have changed due to the noble initiative initiated by the police departments of different states. Today, we are telling you about another such noble initiative. This initiative has been initiated by IPS Sangram Singh Patil and his team, appointed as Superintendent of Police in Mulugu and Jaishankar Bhupalpally districts of Telangana.

A 2015 batch IPS officer, 36-year-old Sangram Singh Patil is also a doctor. In 2011, after completing his medical studies, he practiced for one and a half years and during that time he also started preparing for UPSC. He told The Better India, “My father was hospitalized for kidney dialysis at the time and I was taking care of him. My medical studies were completed but till then I had not joined anywhere. Then a friend of mine advised me that together I can prepare for civil service. There was no such plan beforehand. ”

After this, Patil started preparing for the exam and also started practice in a hospital in Delhi. But preparing with a job was quite difficult. So he left the hospital and started teaching medical related subjects at one or two UPSC Coaching Institute and kept preparing himself simultaneously. In the third attempt, he was selected in the examination and after training he got the Telangana cadre. However, even after becoming an IPS, he got involved as soon as he got a chance to fulfill his responsibility as a doctor.

He is using his skill to help the tribals. He told, “This district is on the border of Chhattisgarh and Telangana. There are about 100 settlements of the Gotti Koya tribal community in this area. In these areas we go for routine petroling and during that time we saw that people are not getting many basic facilities here. These areas are also far from the city and there is no availability of transport, so they do not get medical care in time. ”

Seeing all these troubles, Patil decided to act like a doctor for him. He explains that he, along with his team, decided to set up health camps in these areas on a regular basis. For this, he sought help from the Indian Medical Association, Warangal and doctors of the district hospital and health center are also associated with him in this campaign. He explains that health camps are being organized at different places on a regular basis. Patil and his team accompany 15-20 doctors to these camps.

People in the camp have regular health checkups and those who need immediate treatment are referred to the district hospital. Patil explains, “We have neglected the health of women the most.” During the camp, a lack of hemoglobin was detected in most of the women here. In addition, children get dermatological troubles. Apart from blood checkups, we also do RT-PCR and malaria tests. Along with free check-ups, medicines are also provided free of cost to these people. ”

Dr. Jagadishwar, Superintendent of Mulugu District Hospital, says, “We have been associated with this campaign for the last one-and-a-half years. I have done five mega health camps with my team. In every camp, we have checked up more than a thousand people. ” Dr. Jagdishwar, 50, says that it is not easy to reach these people. These people of the Gutti Koya community live in the jungles, where you have to walk far enough to reach. Even if you reach there, it is not easy to talk to these people because their language is different.

He said, “Sometimes it happens that the people we send to the hospital for better treatment, they run away. Many people have problems with hemoglobin as well as malnutrition. The biggest problem is that you cannot easily win their trust. We repeatedly conduct counselling sessions for them so that they can be assured that we are there to help them. But the participation of SP Patil and ASP Chaitanya and their entire team in these campaigns are worthy of praise. ”

Sai Chaitanya, ASP, Mulugu, says, “In the year 2020, we have done a total of nine health camps, in which health facilities have reached more than 5000 tribals. During these camps free medicines worth about seven lakh rupees have been given to the people. So far 80 doctors have participated in this entire campaign. ” During these camps, some other things like blankets etc. are also distributed to the people.

Apart from providing health facilities to these people, IPS Patil has taken many other initiatives for these areas.

Work is done with children too:

He informed that the Mulugu district was formed in the year 2019 and since then he started working in this district and surrounding areas. He said, “First, a list was made of children from all tribal settlements who were studying in class 10th or 12th or who failed and were about to appear for the exam again. We started calling all these children at different police posts every Sunday. Where they were taught as well as exercises. The objective behind this initiative was to get these children prepared by filling the forms of various recruitment for the 10th-12th pass youth. ”

They ran this campaign for about seven-eight months, in which about 1000 children participated. But they had to close these classes in the lockdown caused by the Corona epidemic. But IPS Patil says that in these seven-eight months, he got a good recognition from these youth. These children mingled with police officers and constables. “When these children started to trust us, we used to ask them if there are any other problems in their areas. Something in which we can help.

Also, when we used to go to these settlements, people were very hesitant to talk at first and did not tell much about their problems. But when these young people started meeting together, it became easy to talk to the people in their villages and villages. ”

Apart from this, Mulugu Police also introduced the ‘Medaram Police Trophy’ in these tribal areas. Regular races, kabaddi competitions were held in these areas. Around 3000 children participated in these competitions held at different levels. He adds, “Their trust in the police has increased as they get along with people at the grassroots level. Also, this area falls in the Naxalite-affected area. If we do not act responsibly here, then the lives of so many tribal youth and their families can go in the dark. So our only effort is that we can connect the youth with better education and provide necessary facilities to the people. ”

IPS Patil concludes, “Funding for all these campaigns is coming from the administration as well as some CSR projects. We have people in need here, so there are people who help them. All they need is a platform from where the right help reaches the right place and we are trying to fulfill the same responsibility. It is not just my alone but also the collective effort of many people so that all the necessary facilities can reach the needy. ”

Facebook
Twitter
Pinterest
WhatsApp
Previous articleRakesh Shukla: The man who sold 20 carts and three houses to give shelter to stray dogs
Next articleSpit and Glass Noodles! The mountains got employment and the taste of it reached all over India

With the beginning of the new financial year, many rules regarding income tax are also going...
Read more

At the age of 30, he started organic farming. Earlier, she used to run a shop. Raised a small amount of money from this...
Read more

The Congress has accused the BJP of violating the Model Code of Conduct, Provision 126A of...
Read more

Start this business from just 5 thousand rupees sitting at home, this way you will earn millions

In the Corona era, you can use the online business platform for business. Many companies...
Read more
Load more