Home INDIA Baby in the lap, light on the head ... This picture tells...
INDIA

Baby in the lap, light on the head … This picture tells a lot, people flared on Goenka’s salute!

Some of the pictures are shocking inside. One such picture is becoming viral on social media these days. This picture is being told of a wedding ceremony. In it, a groom is seen riding on a mare, on the other side there is a mother who, with the help of clothes, hangs her child on the shoulder and has a road light on her head. This picture must have been taken while she was walking behind the groom

Harsh Goenka, Chairman of RPG Group, shared this picture on Twitter, after which it has been in constant discussion. Social media has been divided into two factions with this picture. According to one section, this picture shows the greatness of a mother, who can work hardest for her child and family. At the same time, the other class is telling this picture a shameful truth of society.

I feel like I put in too much effort sometimes. And then I saw this photo! My salute! pic.twitter.com/i8vUbLybB6

There are some people in the midst of all this, who are trolling Harsh Goenka fiercely for this picture. Actually, Harsh wrote while sharing this picture, “Sometimes I feel that I work too hard. That’s when I see this picture. My salute! 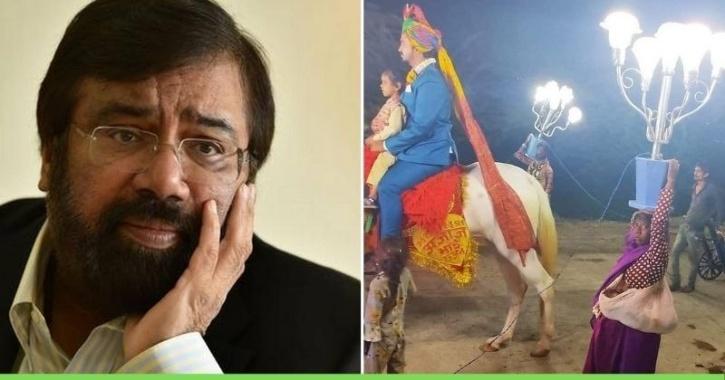 Now, who is right, who is wrong? You decide it yourself. Here are the reactions of some people, with the help of which it can be understood that what are their feelings about this picture?

Harshji, I’d say this is insensitive. The divide btwn the rich and poor!

Instead of saluting her courage we should feel shame that she has to go through all this hardships.

Stop glorifying poverty. This picture speaks volumes about the income divide and what poor people are willing to endure to get a decent day’s wage. As a society we should be haunted by these images of disparity, not try to patronize poverty

This is so inhumane. Can’t they find some vehicles with lighting arrangements in this modern world if they have so much money? I don’t know what’s the solution as the persons carrying lights are earning their livelihood as well. What will they earn if everything becomes robotic?

True, salute to the lady 👍🙏

No one can describe mother’s

What is your opinion about this picture?

Read: This farmer has helped hundreds of farmers with his innovation, has received national awards and patent

Facebook
Twitter
Pinterest
WhatsApp
Previous articleIn view of the increasing cases of Corona, many states issued guidelines, ban Holi in many places
Next articleDeal with all your bank related work in the next 48 hours, banking services will be affected for 7 days out of 10.

The Central Board of Direct Taxes (CBDT) on Thursday clarified that small startups with a turnover of Rs 25 crore will be 100 percent...
Read more

Know the reality of LIC Kanyadaan scheme, the policy is being sold in the name of grooming the daughter’s future

To reduce the financial burden for the daughter's marriage, people like to invest in LIC's Kanyadaan...
Read more

Are you somebody who got an idea that you think can turn into the next profitable million or a billion-dollar business? Not trying to...
Read more

At present, 1402 special trains are running on a daily basis in the country. Apart...
Read more

Often, people buy buffalo worth about one lakh rupees and then start selling its milk. ...
Read more
Load more