Home BUSINESS Be A Real Leader Not A Regular Boss
BUSINESS

Be A Real Leader Not A Regular Boss 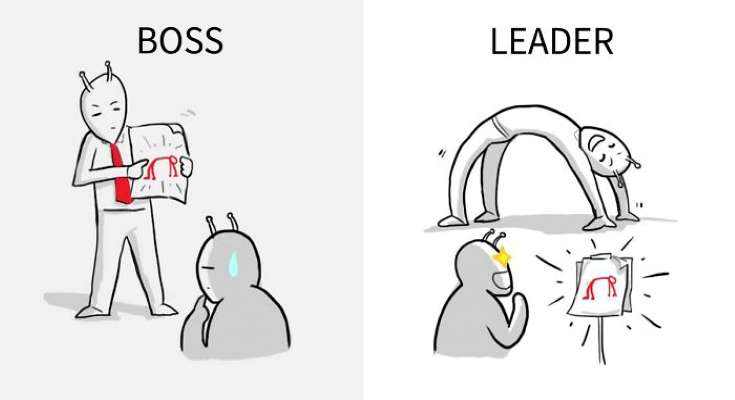 A leader and boss differentiate with each other in many factors. A boss whether a supervisor of any team or a manager of a whole company must always check their leadership qualities daily. Let’s understand a few facts about this trending topic.

Hence, we need powerful leaders in the work society who can guide their workforce in the right direction and can establish proactive communication.

Here’s What Investors Want To Listen From an Entrepreneur?

Distinguishing Leader and a Boss

The main differences in both positions are:

The first step in transforming from a boss into a leader is by increasing our effect on the team members. We need to take care of them, seeking advice and opinions from time to time and explaining your decision-making. In this way, people begin to follow us not only because they have to but they want to follow.

Why You Must Have An Emergency Fund?

This is also the main check which distinguishes leaders from their bosses counterpart. A boss just says assign a task to the employee to work upon, thinking that they will have to understand it as it’s in their qualification.

A leader supports and guides a person throughout the task. He encourages them and creates zeal in them for their work. Without enough encouragement, a worker won’t realize its potential to give fruitful output. A good leader is one who can show them the significance of their work.

Ideas For Investment in Gold This Festival Period

Boss Acts as Strict Teacher While Leader Acts as Guru

It is in the genes of humans to do mistakes while in a work environment, as no one is flawless. The way of dealing with such kinds of screw-ups will determine whether we are a normal boss or a worthy leader.

They can see the efficiency of an employee and evaluate their performance in a certain set of work and thus can allot tasks that are well suited for them. This way the employee can be acknowledged in their field and become proficient in it.

It is in the qualities of a leader to utilize the skills of workers to achieve a shared purpose. while taking note of the pros and cons of individual side by side and orienteering them accordingly and separately.

Instead of stressing on the missing element, leaders guide workers in their flaws and hence assure them in the areas where they are afraid to work on.

Ways to Improve Your Business Sales?

Bosses evaluate the target of their organization and follow strict procedures to get it done within the timeline. They assign tasks to their fellow juniors and go into a “control every part” mode. This is a temporary approach.

A leader, on the other hand, set long-lasting ideas for their team and use it as a main tool of encouragement.

A boss is interested in finishing tasks following a set of rules and usually gets it done by stating people what to do. Whereas a Leader has one thing in mind, finishing work with a notion of what is right and not only doing it right.

Leaders motivate the crowd and promote other’s growth and look to push dedication by setting them as an example to others to follow.

Startup? Here Are Two Simple Ways To Promote Your Idea

Boss Feels Superior to the Team While Leader Constitute the Team

Bosses never take part in knowing their team members, as they think of them as their inferior workers while leaders invest their time in getting to know their workers and see them as equal contributors.

Leadership works based on the relationship between the organization and team members, creating a work culture that is devoted to a straightforward intercommunication system. Where one can clarify his/her dream vision to others easily. A leader is an expert in achieving this whereas a Boss is nowhere near this area.

To become a good leader, one needs to be authentic and honest. A leader should be one who can show their feelings to others and can connect personally with co-workers. If we fail in such areas as love and encouragement, our team will fail in these areas as well. A leader needs to stand up from the crowd and need to help their team to stand out from the crowd as well.

What Startup Employees Can Teach Rest Of Us At Work?

How to Upgrade from Normal Boss to a Powerful Leader?

As we have discussed earlier, we can put up certain qualities like courtesy, two-way connection and lucid hopes for our workers, into our habits and environment to represent ourselves as a good boss or a powerful leader.

A leader who heeds advice from their followers and workers always grows with good authority and results than a boss who just ignores all of it. The latter will also become a victim of loose employees who just won’t listen to him in the coming days.

To stand out from the crowd and become a good leader, one must be consistent in their work conduct, setting clear lines and clear workers hope so that the employees can know what they can anticipate from the organization.

It puts a lot of burden on the employees in their work field if they don’t know what to await from their team leader or manager in return. Too many changes in given tasks and differing hierarchies will only leave them feeling troubled.

Tips to Increase Online Conversions in 2020

Functions of a Team Leader

The work of a team leader is more than just assigning projects and oversight workers. It is the leader who is liable for the success of the organization and as well as its personnel.

A Powerful team leader work following each individual’s pros and cons to bringing a profitable output.

Note that “Most good leaders are once good bosses too.”

In the work environment, whenever one reaches a managerial role and start to develop their leadership abilities, it is normal to display some of the boss characteristics, but with time as we start overcoming these negative habits, we transform into a mighty leader.

The contribution of one rupee to be done every day on their own wish is proving to be a big help for the young...
Read more
BUSINESS

There is definitely a time in life when it seems that all roads are closed now. In such a situation, people usually sit...
Read more
BUSINESS

A Survival Guide for Startups in the Era of Tech Giants

In this modern world of technology, it is becoming easier to copy other companies' products and ideas. When you are starting up your new...
Read more

How To Start a Startup Business in India?

Do you want to start a business, are thinking of doing or are you thinking of starting a startup, then this article is a...
Read more

The exporters' complaints about the cost of debt are going to end. Now exporters will get loans at less than 8 percent of the...
Read more
Load more