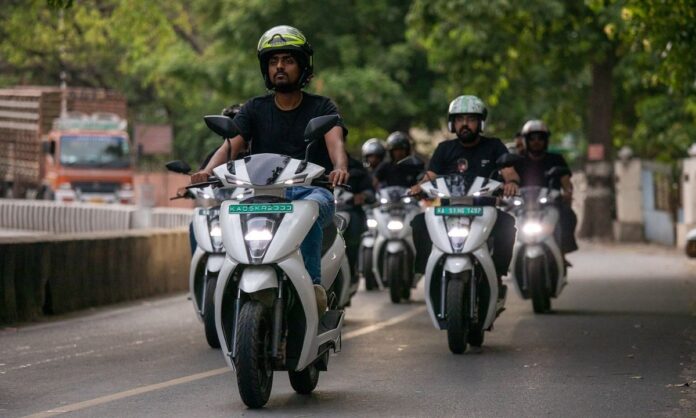 These enterprises are manufacturing EV vehicles according to the needs of the customers. At the same time, increasing awareness among people about increasing pollution and consumption of natural resources is also increasing. Somewhere, these enterprises are also contributing to the green future of India. After electric bicycles, scooters and e-rickshaws, many companies like Maruti, Tata Motors, are also moving into the field of electric cars. It is expected that in the coming few years, we will see more and more electric vehicles on the roads of all the villages and cities of the country.

Today we are telling you about five such EV companies, who are contributing to fulfill this objective.

The Bangalore-based company was started in 2013 by two IIT Madras graduates, Tarun Mehta and Swapnil Jain. Secondly, like electric vehicle companies, they also aim to make electric vehicles of good caliber for Indian customers. This company is making electric scooters according to Indian roads and they have launched two models – Athar 450X and Athar 450 Plus.

According to the company, the Athar 450X scooter can be propelled at a capacity of 85 km per hour. It has two disc brakes and 22 liters of storage. It has a six-kilowatt PMSM motor and a lithium-ion battery. Along with electric scooters, the company provides its own ‘charging dot’ for its charging. Apart from this, the company has also launched a mobile app, so that you can check the charging status of your scooter anywhere.

Also, around 74 public charging dots, ‘ather grids’ have been installed by the company in 8 cities so far so that you can take advantage of them when needed. Currently, the company operates in cities such as Bengaluru, Hyderabad, Chennai, Jaipur, Mysore, Pune and Ahmedabad. The company aims to set up 6500 charging dots by the year 2022.

Tech-Platforms that are the cornerstone for Indian homegrown brands

PURE stands for Power Using Renewable Energy and incubated by startup IIT Hyderabad. PURE EV is the electric vehicle manufacturing unit of PuREnergy, launched in 2016 by Dr Nishant Dongri, a professor at IIT-Hyderabad and Rohit Wadera, an IIT Bombay alumnus. This company provides electric bicycles and scooters to customers. In the coming months, an electric motorcycle model ‘ETRYST 350’ is also being launched by the company.

The ‘EPLUTO’, developed by the company, is a premium electric scooter model. The interesting thing about this scooter is that its battery is portable. You can charge the battery of this electric scooter in any 16amp socket in your home or office. The company’s model of electric motorcycle will be launched in the market soon. According to a report by The Hindu, the speed of this motorcycle is 85 km per hour and once full charged, it can run for about 120 km.

Hemlata Annamalai founded her company, ‘Ampere Vehicles Pvt. Ltd. in Coimbatore, Tamil Nadu in 2008. Ltd ‘, which is making separate electric vehicles for urban and rural areas. Says Hemlata, “We want everyone to have access to high-tech technology. That is why our objective is to take advanced and sustainable transport to rural and semi-urban areas. ”

Along with electric scooters, the company is also manufacturing low-cost and three-wheeler vehicles with no smoke. The company has launched six models of electric scooters and, in addition, is making other e-vehicles. His e-vehicle, ‘Mitra’, is specially designed to carry garbage. This vehicle is of two types of capacity. One with a capacity of 250 kg and the other with a capacity of 450 kg. Similarly, another of his vehicles, ‘Trissool’, has been built keeping spinning mills in mind. The goal of this three-wheeler is to increase the productivity of employees, keeping in mind their safety. This is to save time, making transportation inside the mill easier.

This startup was started in the year 2017 by Amit Gupta, RK Mishra, Naveen Dachuri and Hemant Gupta. The Bengaluru-based startup has launched an electric bicycle – ‘Yulu Move’ and an electric scooter – ‘Yulu Miracle’. Yulu is a company that provides eco-friendly transportation options for people to and from their mobile app. You can rent Yulu vehicles through the app, for a while and after reaching your designated location, park it at a nearby Yulu zone.

Yulu made his debut with an electric bicycle but, in 2019, he also launched an electric scooter. This e-scooter is powered by a lithium-ion battery. It is designed specifically for high traffic areas of cities. It runs at a speed of 25 km / h. It weighs 40 kg and once charged it can last up to 70 km. Currently, the company has 10,000 EVs and services are available in Bengaluru, Delhi, Gurugram, Mumbai and Ahmedabad. In these cities, you can download its mobile application to take the convenience of Yulu.

The Jaipur-based electric vehicle startup was launched in 2017 by Nischal Chaudhary. The objective of this startup is to solve problems such as carbon footprints and noise pollution through e-bicycles and e-scooters. Apart from electric bicycles, several models of electric scooters have been launched by the company.

The company’s ‘Batt: RE ONE’ scooter has an LFP battery, which can be removed from the scooter and then re-inserted into the scooter. Its battery takes two and a half hours to charge. It also features an anti-theft alarm and a USB charger. Apart from this, they have also launched ‘gps: ie’ scooter, which is a smart vehicle and can carry a SIM card. It has features like GPS tracker, device management, device status alert and Secure Park.

Facebook
Twitter
Pinterest
WhatsApp
Previous articleNight Curfew in Delhi due to rising corona, what works are banned in other states of the country?
Next articleHaryana: Vermicomposting unit of MNC started leaving, earning in lakhs

Your favorite car will be expensive from April 1, after all, why companies are increasing the price, how much will this year increase?

First petrol-diesel, then LPG, then edible oil and now much more is going to be more expensive. Along with the items of necessity, now...
Read more

How To Start Health Care Business in India?

If you too are thinking of doing business of health care, then you will become aware of the benefits of this business. There are...
Read more

Finance Minister Nirmala Sitharaman said that the WBG has played a role in doing this with...
Read more

Gram Priya Scheme: A chance to get millions from saving of Rs 189 daily, will get a lump sum on the maturity with a...

One can invest in village priya scheme of post office for 10 years. This is...
Read more

Mumbai, April 2021: Over the Top (OTT) media is one of the fastest sought-after media by Advertisers today. Due to increasing AD: TECH complexities,...
Read more

Why You Must Have An Emergency Fund?

Life is completely unpredictable. A sudden business loss, job loss, unexpected bills, car breakdown, theft and much more can cause you a lot if...
Read more
Load more