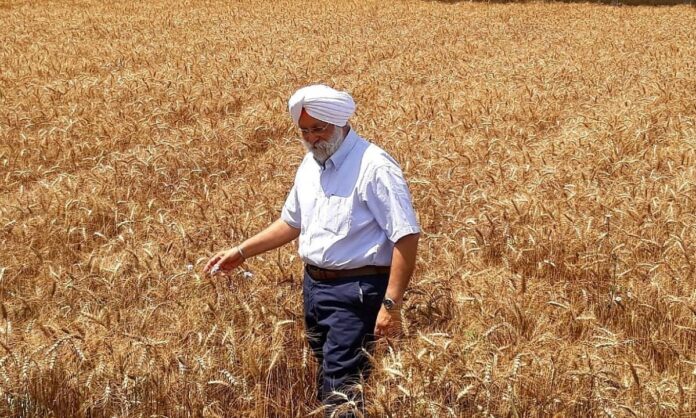 It is said that if you want to see a good change in the world, then you should start by making changes in yourself. 60-year-old Gunbir Singh, a Punjab businessman from Punjab, has also made many such changes for the betterment of himself and the environment. Gunbir Singh is the President of ‘World Wide Fund for Nature- India Punjab’. He has been working for the environment for more than 15 years and he started it from his home. In addition, he has also set up an organic market to easily sell the organic produce of the farmers.

Gunbir Singh, a resident of Amritsar, lost five members of his family, about 18 years ago. In those days, his family business was also running at a loss. However, he did not give up and started afresh. He single-handedly started his own travel agency in 2003 and, at the same time, decided that he would dedicate his life to the environment. Therefore, he started the Dilbir Foundation in 2004, through which he aims to connect farmers to organic farming and motivate common citizens to eat healthily and waste management.

Talking to The Better India, he said, “I lost my family members to cancer. We all know that the chemicals used in agriculture, increasing waste in the country, falling quality of food and increasing diseases among people, are all related to each other. We cannot solve all these problems in one day. But if we work on them one by one, then there can definitely be changes. Therefore, following the ‘Dasavand’ learning, I decided to spend a tenth of my earnings for the betterment of society and the environment. ”

Made his house ‘Zero-Garbage House’:

Gunbir Singh, first of all, worked on reducing the waste coming out of his house. He explains, “About 60–70% of the waste from our houses is organic waste. People can manage this waste themselves. You can give plastic, metal and glass waste to recycle. It should start with segregation of waste. Compost is made from organic waste and other types of waste can be recycle. ”

He prepares organic manure from the organic waste released from his home. He uses this manure to nourish his home garden. He has planted many trees in his home, including seasonal vegetables and some fruit trees. He says that he has made large iron planters for gardening on the roof, in which he grows about 10 types of greens and vegetables at one time. In addition, they have planted fruit trees such as lemons, oranges and figs in pots.

Along with gardening and composting at home, he also harvests rainwater and uses the excess water from the RO system installed in his home. He says that he uses RO water to clean and deliver it to plants.

To create awareness among the people, through his foundation, he has launched the campaign ‘Amritsar – my city, my honor, my responsibility’. Under which, they tell people how their small steps can prove beneficial for the society and the environment. His campaign has received a good response and many people have joined him. Due to their efforts, mangrove pits have also been built in many citizen parks of the city so that all the organic waste of the park is used for composting, not to burn it.

He also started an awareness campaign in schools to use pencils made by recycle old newspaper instead of wood. He made children and teachers aware of this by visiting several schools in the city. Inspired by this initiative, a student worked to carry out his campaign. 19-year-old Anirudh Arora was in the tenth grade when he learned about recycled pencils. Then, he felt that every student can take this small step for the betterment of their environment. So at his level, he went to several schools in Amritsar and Ludhiana and informed the students about this.

Gunbir Singh says that he started an initiative to gather farmers in small groups and connect them to organic farming. Through his foundation, he is teaching farmers how to do chemical-free farming. He says, “For farmers, it is not possible to start organic farming immediately. Because, in the beginning of organic farming, the production is not good. In such a situation, we motivate the farmer to do organic farming on some of his land. We fully support them in this process. ”

This farmer has helped hundreds of farmers with his innovation, has received national awards and patent

Also, the biggest problem for farmers is that they do not get a good market for their organic produce. To solve this problem, Dilbir Foundation started the ‘Farmers Organic Market’ in 2016 in Amritsar. Amandeep Kaur, working with the foundation, says, “The purpose of setting up this organic market was to give farmers a platform where they could connect directly with customers. For this, the Foundation not only engaged with farmers but also conducted awareness campaigns for healthy eating among the people. Farmers do not have to sell their produce in the market, they can sell their produce to the customers here in this market. ”

Amandeep Kaur, has been associated with the Foundation for the last four years and says that the Foundation shows only one path to the farmers and helps them in the beginning. Gradually, these farmers start connecting with other farmers and customers. Not only this, these farmers also help each other. In this episode, his foundation’s initiative #NoMorePoisonInMyFood has been a huge success and has helped about 20 thousand farmers so far, through different mediums. ”

Avatar Singh, who belongs to Jethuwal, a village in Amritsar, started organic farming on some of his land about four years ago. He says, “It is not possible to do organic farming on the whole land simultaneously. So, I started a little bit. Whatever we grow, we deliver it directly to customers. In the beginning, we had a lot of market problems. But, then a farmer met Gunbir Ji in a seminar and came to know about this market. We have been putting up our stall here since then. Apart from this, there is also an opportunity to set up stalls in farmer fairs and agricultural schools. ” Apart from Avtar Singh, there are many other farmers who have not only started organic farming with the help of the Foundation but have also started making their own food products etc.

Gunbir Singh says that for society and the environment, it is not difficult to do anything at all. You can also take good initiative by changing your small habits. Your aim should be that not only you get healthy food, but you also support the farmers who grow healthy grains and fruits and vegetables.

There are many more campaigns being run by the Dilbar Foundation, you can check their Facebook page to know more about them and to contact them.

Chief Minister Thackeray gave instructions to prepare such a scheme with regard to the implementation of...
Read more

Canara Bank’s Special Scheme: Double the amount in one year, there is still a chance to earn big

Make Money: Mutual funds can be a good option for you if you want to get...
Read more

The start of IPL 2021 has started. All the teams of the league are ready to put their full strength to the title. Like...
Read more
Load more