Neither the cost of electricity nor the worry of crop rot! Introducing the solar powered refrigerator 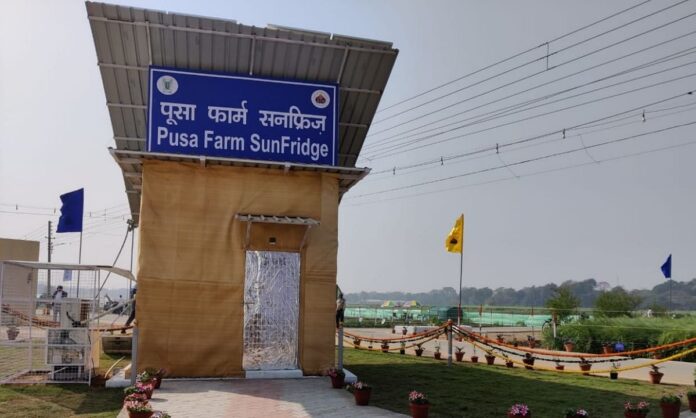 Due to lack of means to properly store the food produce of the farmers, they have to suffer many losses at times. Many such reports came to light in the lockdown caused by the Corona epidemic, when farmers’ produce deteriorated due to not reaching the market on time. But at the same time, the farmers of Picholia village of Ajmer have been successful in saving their produce by adopting the right storage technique. Yes, ‘Pusa Farm Sunfridge’ has been built in this village by the Indian Agricultural Research Institute (also known as the Pusa Institute). This is a special type of ‘Cold Storage Technique’.

Under this ‘cold storage’ technique, farmers can store their different produce such as grains, pulses, fruits, vegetables and eggs etc. This technique has been developed by Dr. Sangeeta Chopra, Principal Scientist, Department of Agricultural Engineering, Indian Agricultural Research Institute, and her team, along with researchers from Michigan State University, USA.

Regarding this, Dr. Chopra said that the objective of making this technology is to provide good storage facilities to the farmers. He had long ago formulated a technique only on the principle of ‘evaporating cooling’ (evaporative cooling). Which was also planted in many villages of Rajasthan and Punjab. However, gradually he felt that this technique could be improved further. In 2015, he received a grant from the United States Agency for International Development to develop this cold storage technology.

The 53-year-old scientist adds, “Pusa Farm Sunfridge is an innovative, off-grid, battery-free and cold storage facility that can be built on farms and works without electricity.” It uses ‘evaporating cooling’ (evaporative cooling) and ‘solar refrigeration’ techniques. This cold storage of 10x10x10 (length, width, height) feet works entirely with solar energy. It has solar panels on its roof, which has a capacity of five kilowatts. It uses three kilowatts of energy to run a 1.2-ton air conditioner fitted in cold storage. In the daytime, where the temperature inside it is three to four degrees Celsius, at night it becomes eight to ten degrees Celsius. ”

This technique is quite beneficial for small farmers, at the community level. Along with applying this technique in his department, Dr. Sangeeta has also deployed Picholia village in Ajmer in Rajasthan and Chamrada village in Panipat in Haryana. Apart from this, some time ago he has also built a Pusa Farm Sunfridge at the fairground in Delhi. She says, “The cold storage created in the fair ground has been made such that you can move it from one place to another according to your need. Instead of concrete, only metal frames and plates have been used to make it. It is quite easy to disassemble and reposition it by moving it to another location. ”

The cost of building a unit can come to four and a half lakh rupees or more. But this technique is helpful in increasing the earnings of farmers. Tanwar Singh, a 36-year-old farmer from Picholia village, says, “In March last year in our village, this cold storage was built. Because of this, during the lockdown, we farmers benefited immensely. We can comfortably store our fruits and vegetables inside it for 10-15 days. ”

Tanwar Singh cultivates vegetables on his 12 bighas of land. They do not have enough means to manage any personal cold storage for themselves. But ever since ‘Indian Agricultural Research Institute’ has built ‘Pusa Farm Sunfridge’ in his village, he is quite relieved. He says that earlier he had to go to Mandi every day to sell vegetables. Because, in a day or two, the vegetables started spoiling. But, in this cold storage, he collects three to four days of vegetables and goes to sell them in the mandi. This has also reduced his commuting fare and at the same time, he is also able to sell his produce at a good price.

He added, “I am able to keep the produce fresh for several days because of cold storage. On the day there is a good price of vegetables in the market, on that day I go there and sell them. It also fetches higher prices for vegetables. About 15 farmers in our village are taking advantage of this technology. ”

Inder Mani, head of the institute’s ‘Agricultural Engineering’ department, says, “Our aim is to make this technology available to more and more farmers. Every year, about 40% of food grains are wasted here. Because, our farmers do not have the right storage techniques. Pusa Farms sunfreeze cold storage technology can work in many ways. First, it can be planted on farms so that after harvesting, the produce can be stored directly. Secondly, it can be planted in mandis and markets, where farmers can store their fruits and vegetables by paying daily rent. This does not require them to sell their produce at low prices, for fear of spoiling their produce. ”

Therefore, the institute is trying to include this technology in the government subsidy scheme. In addition, they are trying to work together with Farmer Producer Organizations (FPOs). Mani further states, “Under the government’s plan to double the income of farmers, about ten thousand FPOs are to be formed. If all FPOs come forward to introduce this cold storage technology for their respective farmer groups, we will be able to help the farmers on a large scale. ”

At present, his preparation is to make Pusa Farm Sunfridge in Palla village of Delhi. They have also started licensing it to further develop this technology. However, only one company has been granted this license and discussions are going on with the other two-three companies. Dr. Chopra says that by further developing this technology, he has also made it remote-controlled. So that farmers can control it even by sitting at their home.

If you want to know more about this technique or want to have it installed here, you can email Dr. Sangeeta Chopra at dhingra.sangeeta@gmail.com.

Facebook
Twitter
Pinterest
WhatsApp
Previous articleWith the loved ones left with cancer, but did not give up, now farmers are connecting with organic farming
Next articleInvest in this special scheme of PNB for better tomorrow, get more profits

What is your favourite chocolate? Dairy Milk, Perk or KitKat? Which brand of chocolate ice cream do you prefer, Baskin Robbins, Amul, or Vadilal?...
Read more
AGRICULTURE STORY

The passion of gardening is such that the garden made the roof of the house, from litchi-strawberries to mango-guava grown

There is no age to learn something new. When you decide, a new path opens for you. Retired surgeon of Kolkata Dr. Kali Prasad...
Read more

Amit Shah said that elections were held peacefully in the states which were known for elections...
Read more

This year will not be the biggest exercise of Indian Air Force ‘Iron Fist’, know what is the reason

The main motive behind conducting 'Iron Fist', an important exercise of the Indian Air Force, is...
Read more

How To Start Travel Agency Business?

Travel and tourism's contribution to the world's economy is huge. And more employment opportunities are also being created in it. According to data from...
Read more

We all know Jio as one of the leading telecommunication and mobile network providers in the country. Launched in the year 2015, in a...
Read more